Camped in a cluster of tents and vehicles at various blockades along a series of remote roads on British Columbia’s Vancouver lsland, land defenders have been protecting old-growth forests around Fairy Creek since August 2020.

The activists were asked to leave the area on April 1, 2021, after British Columbia Supreme Court Justice Frits Verhoeven approved an injunction filed by Teal-Jones Group. Enforcement began nearly seven weeks later. Months of police tactics followed, and by August 2021 the Fairy Creek Blockade had become the largest act of civil disobedience in Canadian history. Over 1,100 activists have been arrested there since May 2021.

The initial injunction was overturned when it came up for renewal. Justice Douglas Thompson ruled that police misconduct in Fairy Creek had disgraced Canadian courts. But upon an appeal from Teal-Jones Group, the injunction was reinstated by the British Columbia Court of Appeal.

The precious environment of Fairy Creek

Even a single tree in Fairy Creek, argue conservationists, is a vast village of plant and animal life, including threatened species like the marbled murrelet and various forms of lichen. The forests around Port Renfrew – a town that recently began billing itself as the “Tall Tree Capital of Canada” – are the last coastal forests of their kind on the planet. These are temperate rainforests, unique ecosystems with abundant precipitation that differ from tropical rainforests because they occur in zones with temperate climate. Those in the Fairy Creek area are among the last temperate rainforests in the Northern hemisphere and in the whole planet.

Big-tree enthusiasts have found exceptionally large western hemlocks, massive Douglas firs, and yellow cedars there. Some of these trees are the longest surviving lite forms in Canada, at more than 1,500 years old.

For land defenders, every blockade second counts. It only takes minutes to fell a 1,500-year-old-tree. And a forest of these trees is a vast purification system that takes climate-warming carbon dioxide out of the atmosphere. 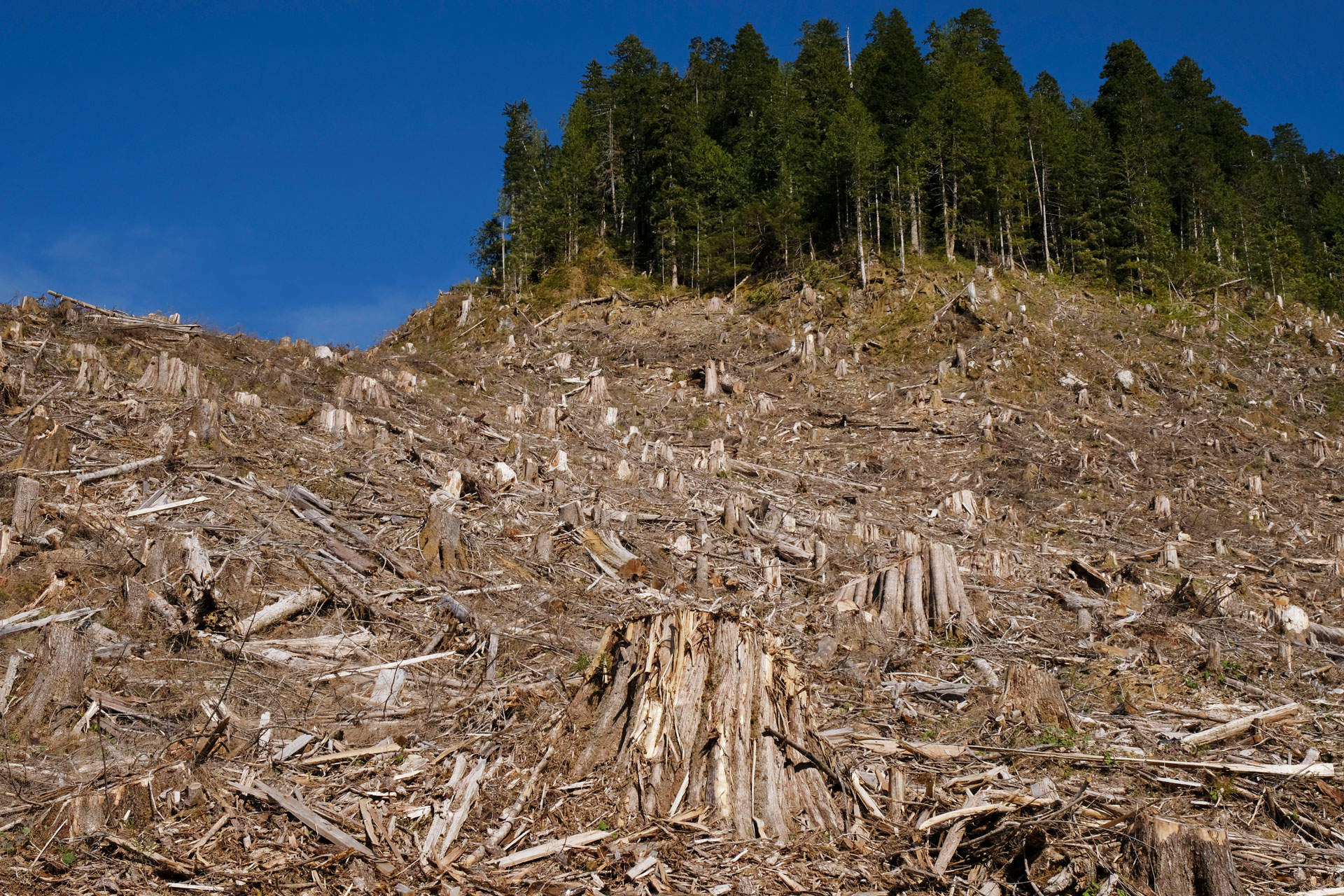 This is a cut block. Large stumps can be seen. There are still old-growth trees alive in this area, but they are at risk of being cut. The blockade that existed near this but block was enforced in May 2021, which means there are no blockades protecting this area to date. May 15, 2021. Outside Lake Cowichan in the Cayacuse area, Canada. 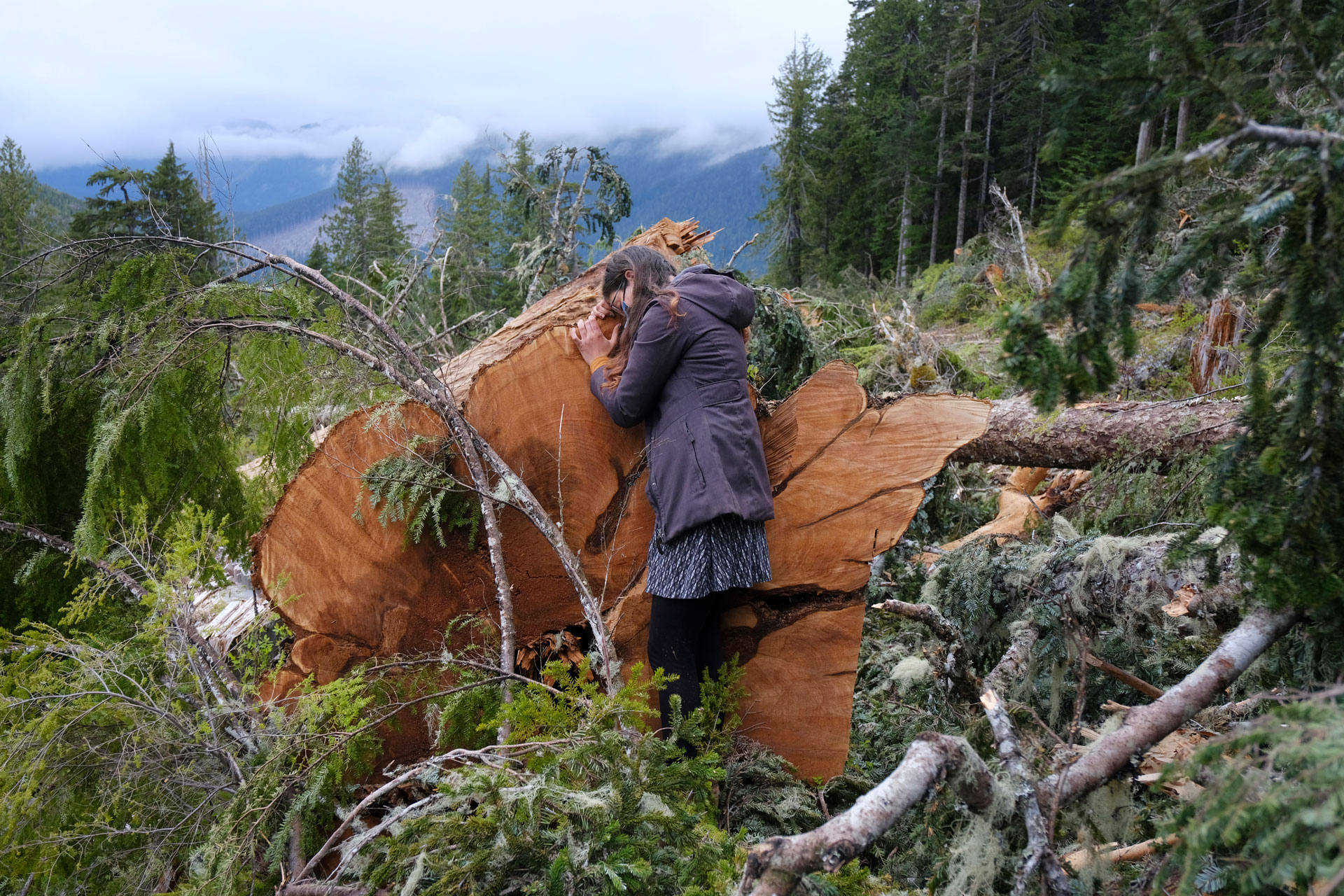 A woman leans on a tree that was cut recently before this photo was taken. She found it with a group of forest defenders who had been blocking the road used by loggers. May 17, 2021. Outside Port Renfrew in “BD 2000” cutblock, Canada. 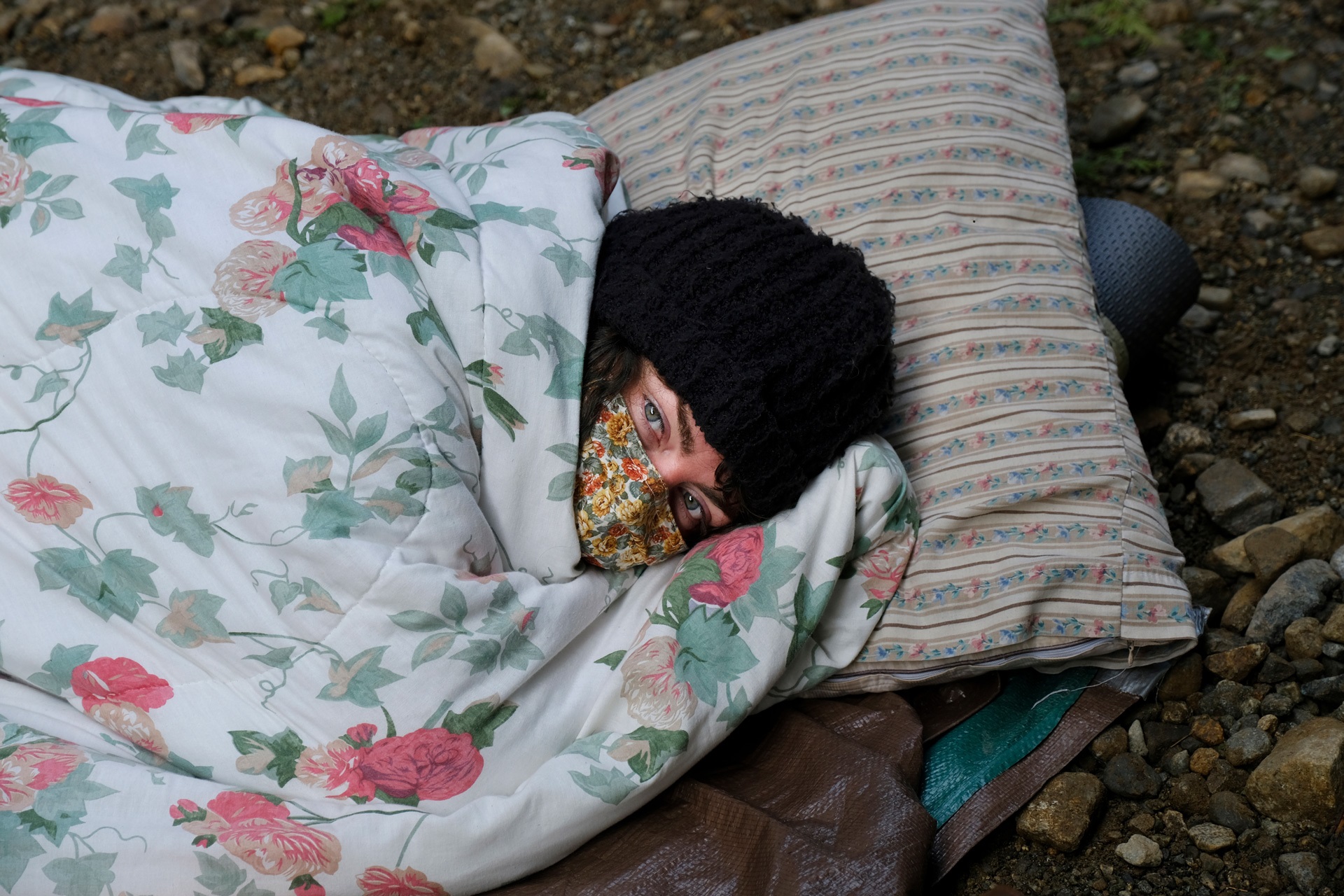 A young woman is chained into the ground, in what is called a Sleeping Dragon. It’s a PVC pipe in the ground that has a chain link at the bottom, which forest defenders lock their arms into. She was removed by an extraction team. June 8, 2021. Outside Port Renfrew, Canada. 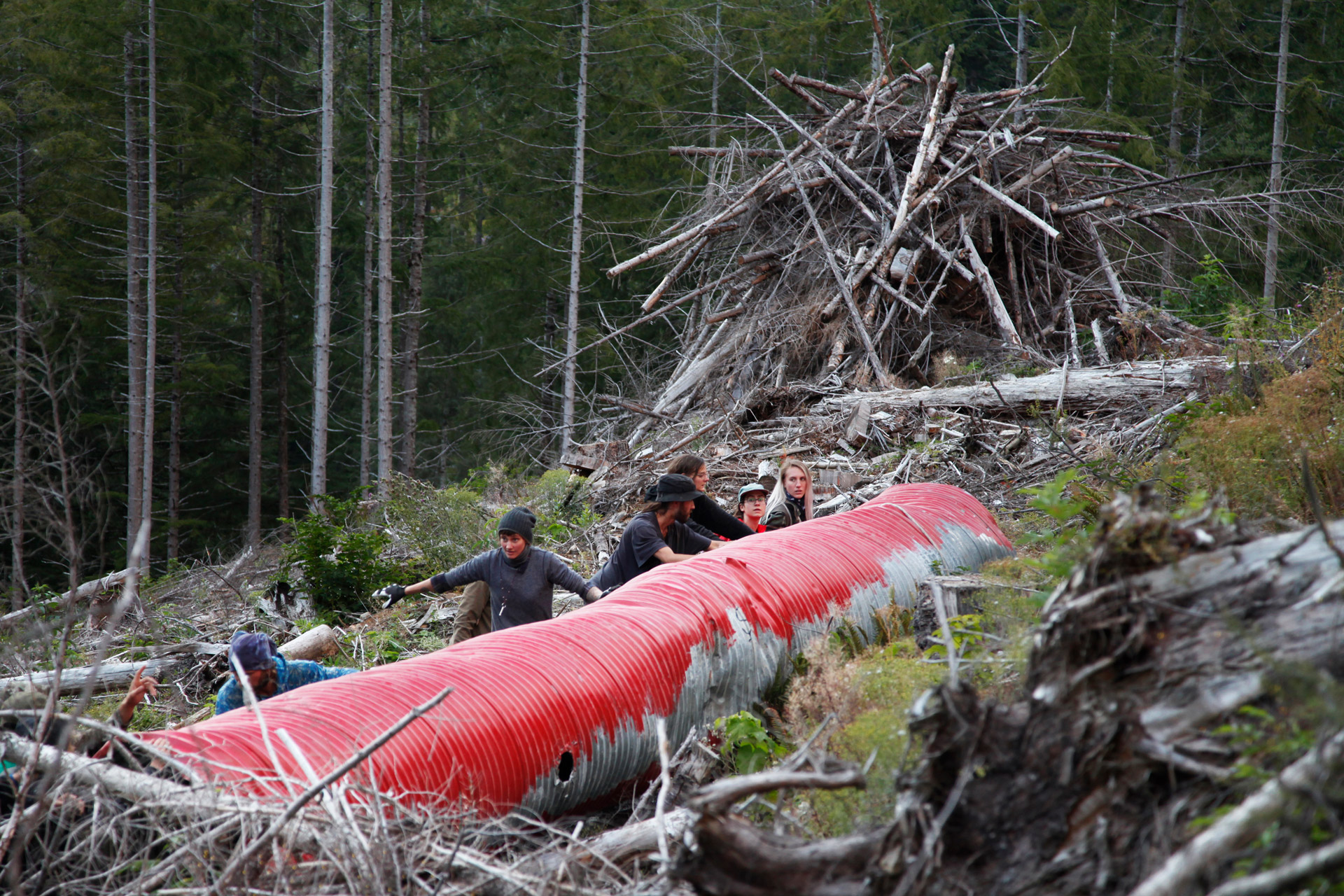 Land defenders attempt to move an obstacle across the road before police arrive. Their goal is always to buy more time for the trees, by stalling vehicles from driving up logging roads. August 22, 2021. Outside Port Renfrew, Canada. 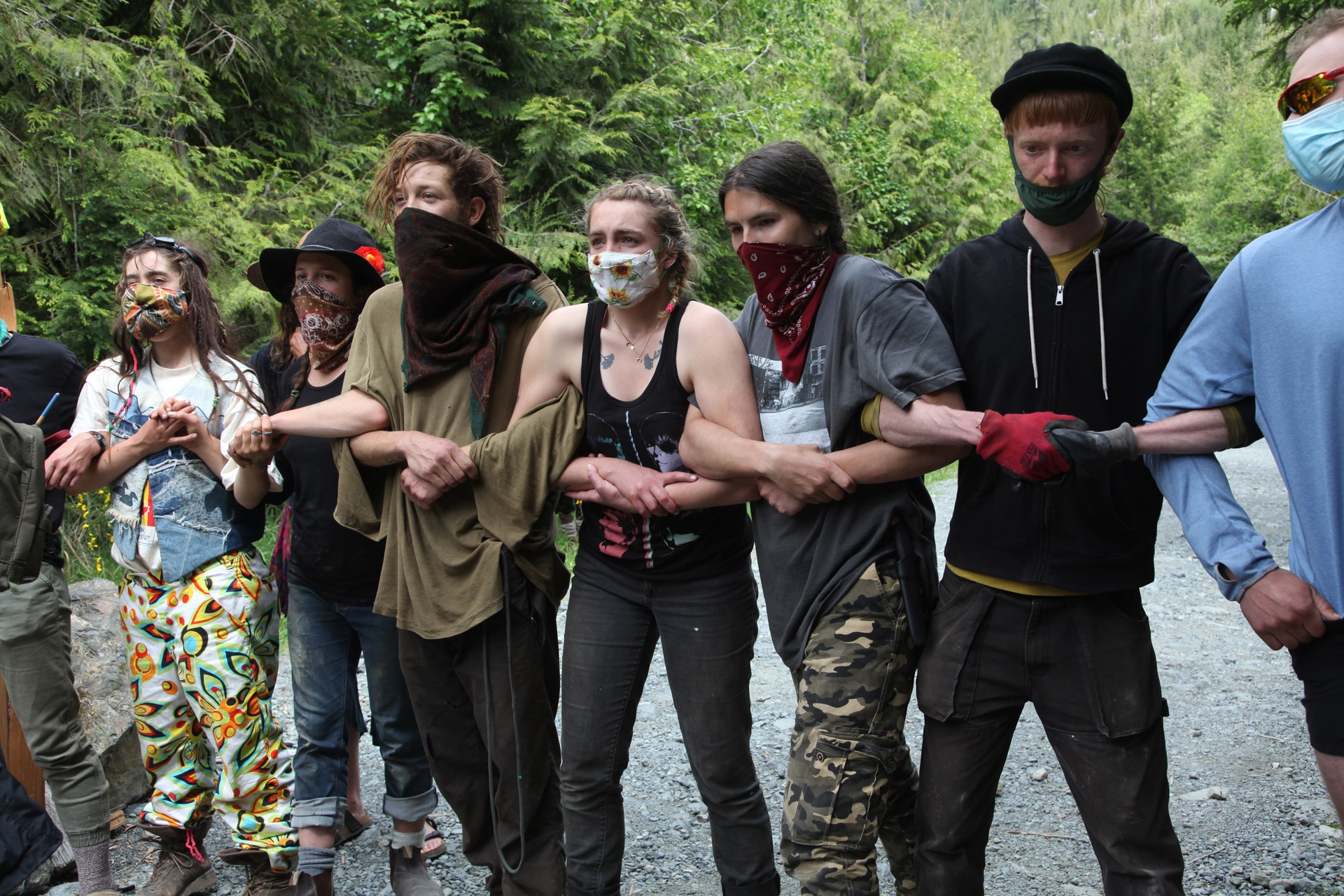 A group of blockaders protect a patch of old-growth called “EDEN GROVE”. They link arms because a hostile individual attempted to get through their blockade. The situation escalated and the visitor was yelling and attempting to push a few of the blockaders who stood together in unison to defend this land. May 23, 2021. Near Port Renfrew, Canada. 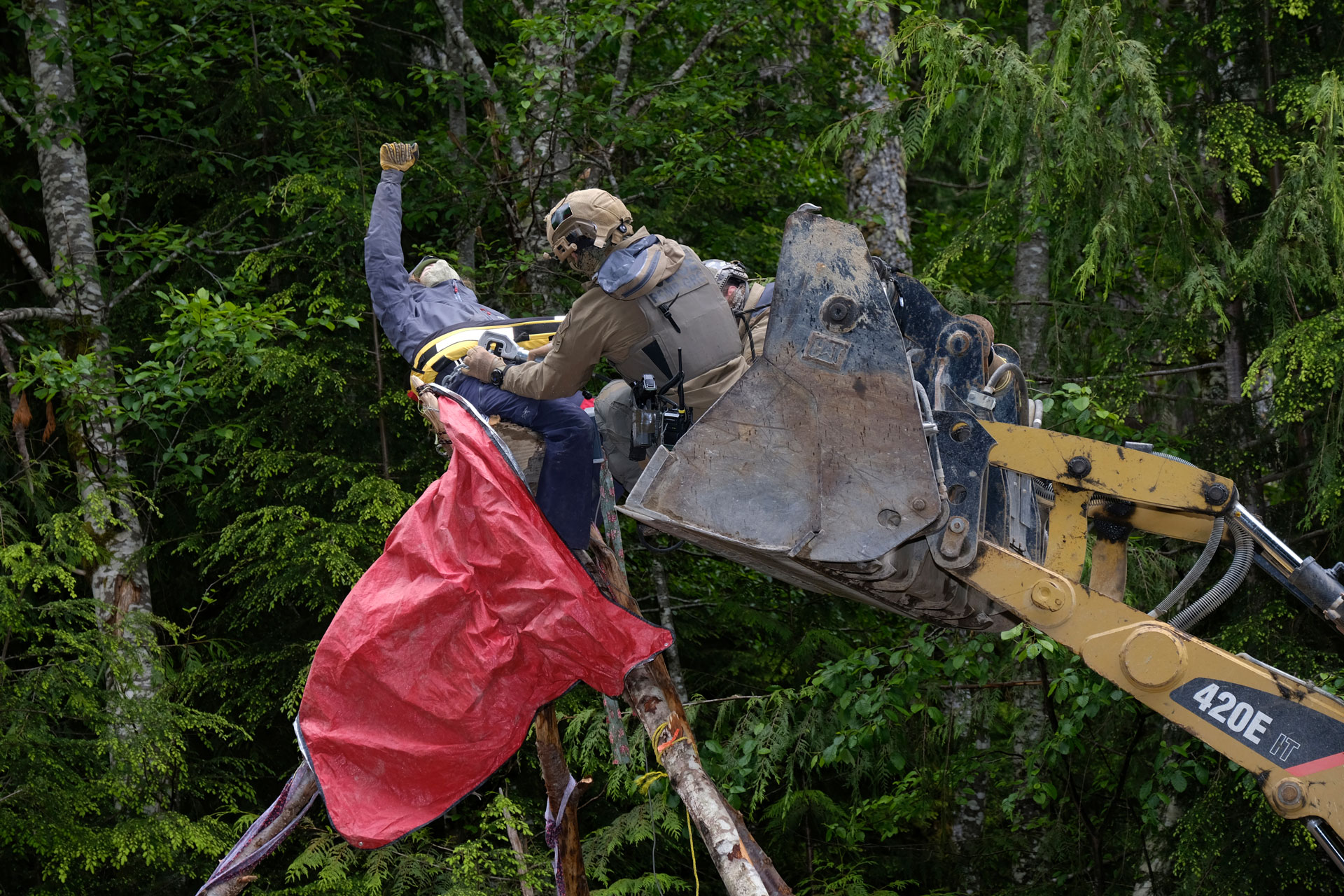 Tactical police remove a land defender from a tri-pod, which is a three legged structure, made by land defenders. The purpose of the tri-pod is to prevent heavy machinery from entering the road. This blockade was blocking roads to Fairy Creek’s main forest area. June 11, 2021. Outside Port Renfrew, Canada. 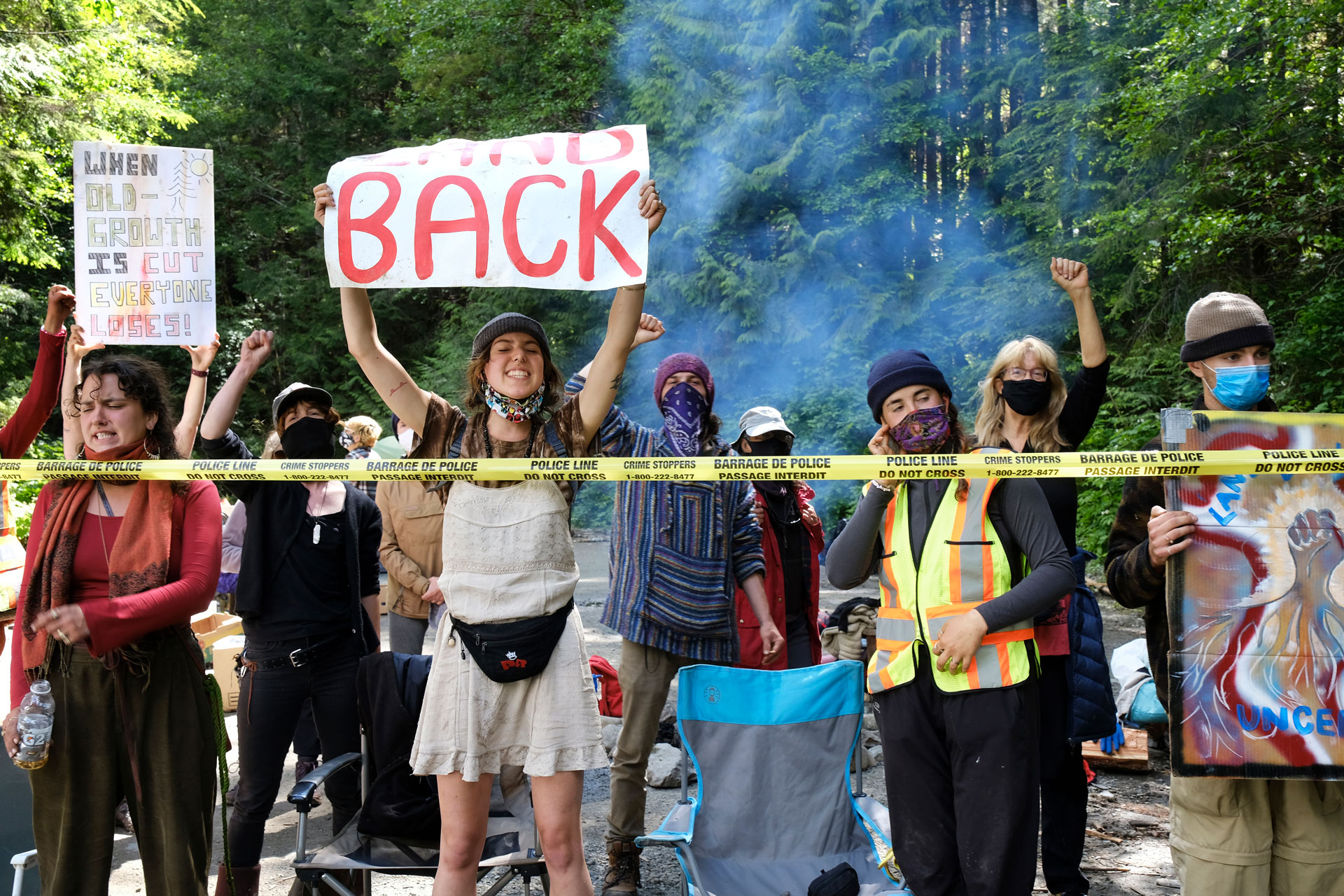 A group of forest defenders chant support for their members who are locked into the ground and up in a tri-pod contraption on the road below. They are watching them be excavated from the blockades while cheering. June 8, 2021. Outside Port Renfrew, Canada. 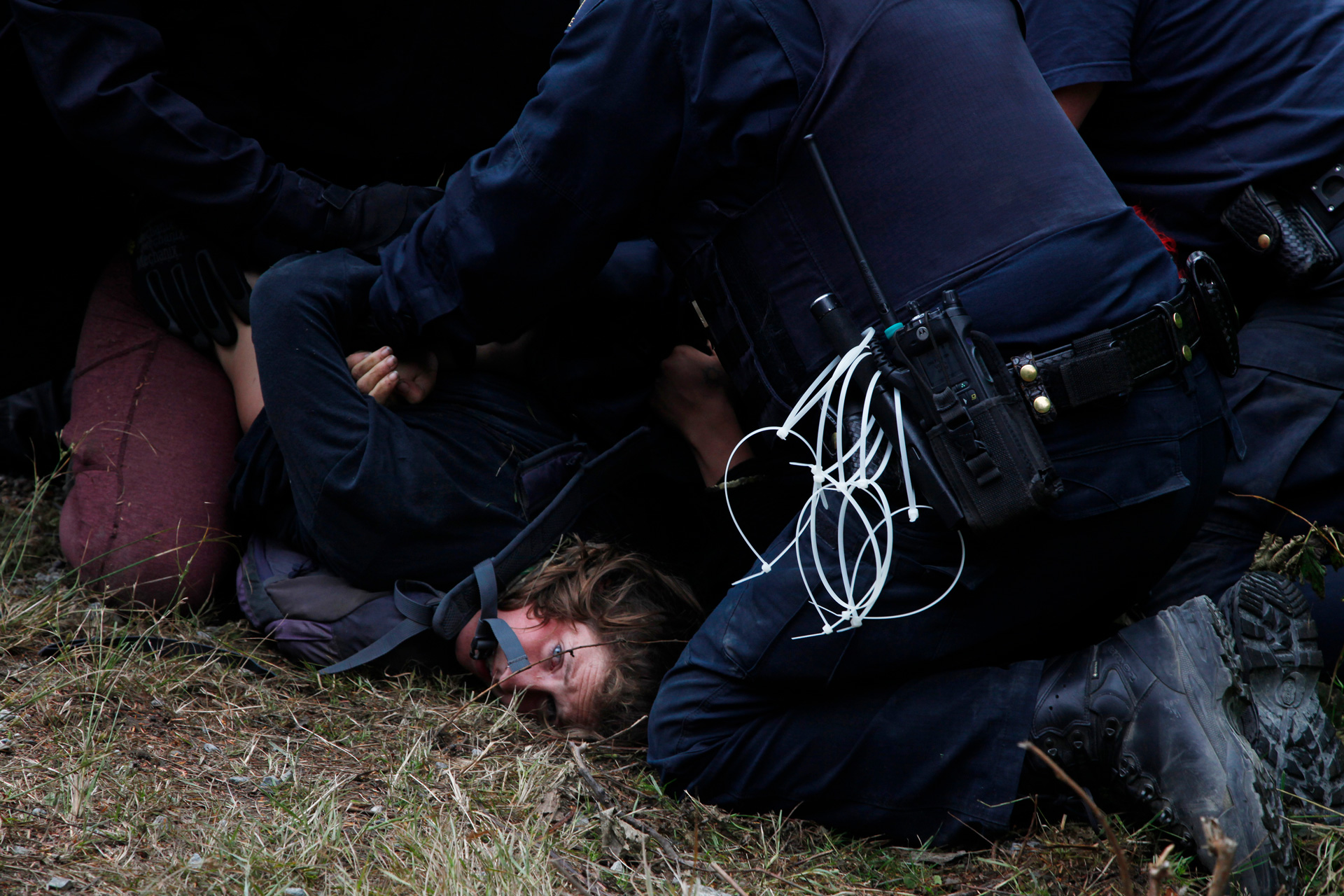 A forest defender is arrested. This scene depicts a large-scale arrest event where many forest defenders were pepper sprayed for engaging in a “blob” action. The “blob” is when a group of protestors link arms and attempt to walk through an exclusion zone line as a form of civil disobedience. August 21, 2021. Outside Port Renfrew, Vancouver Island, Canada. 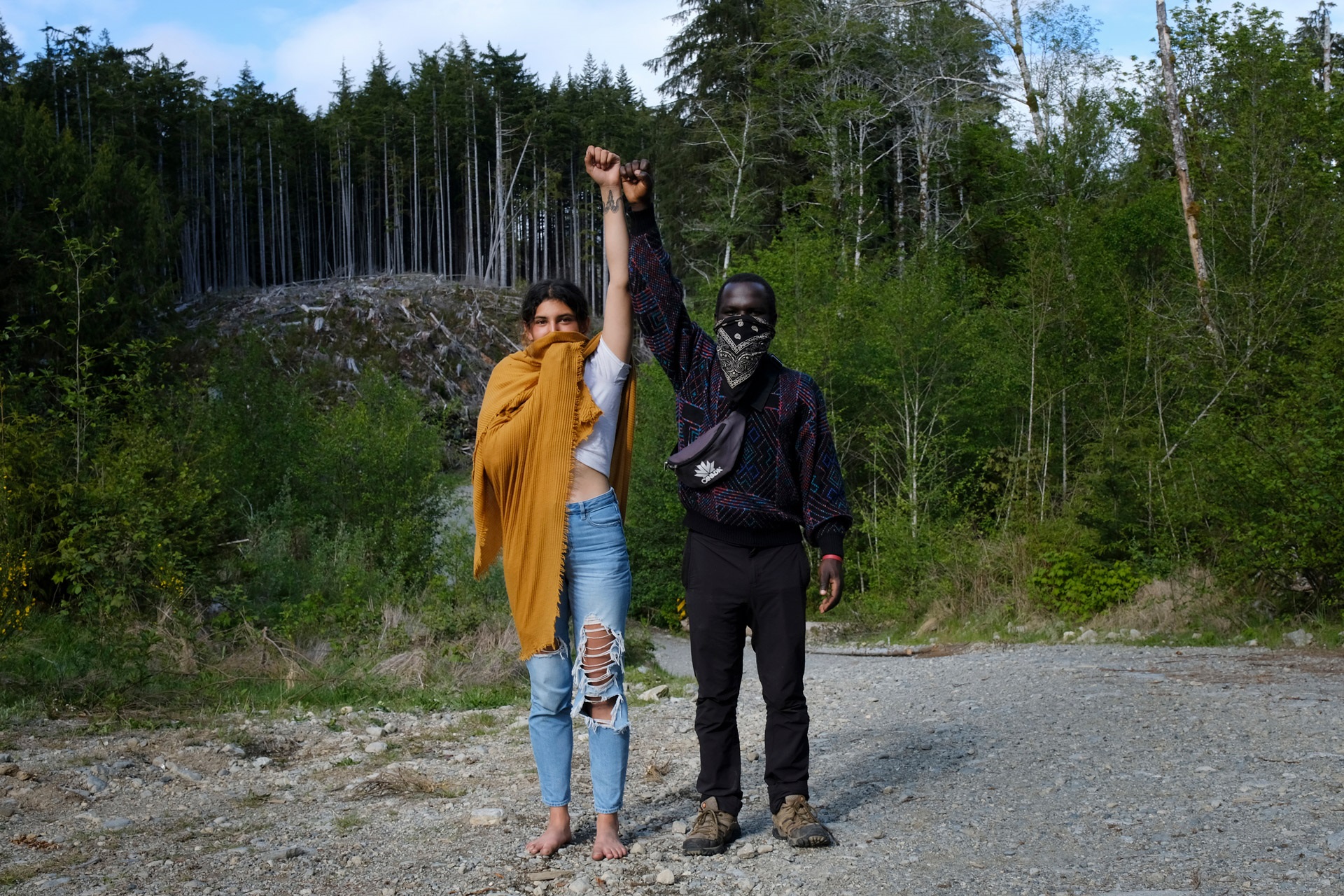 These are two land defenders, putting their hands up in solidarity with old-growth protection. They attended the camps before arrests within the injunction zone started. May 12, 2021. Outside Port Renfrew, Canada. 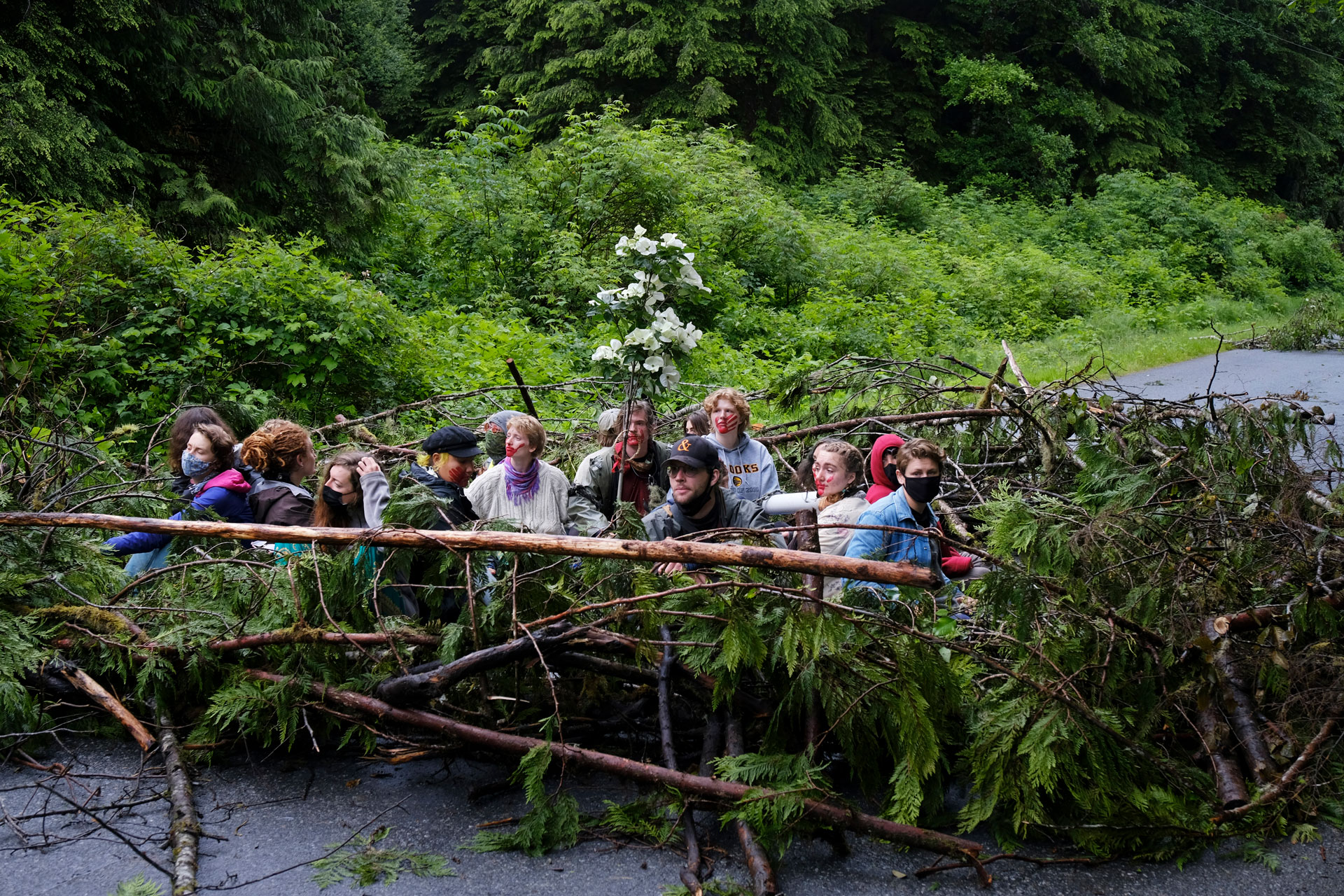 Land defenders sit in the road, surrounded by branches that they placed there, to block loggers from entering old-growth forests. June 14, 2021. Outside Port Renfrew, Canada. 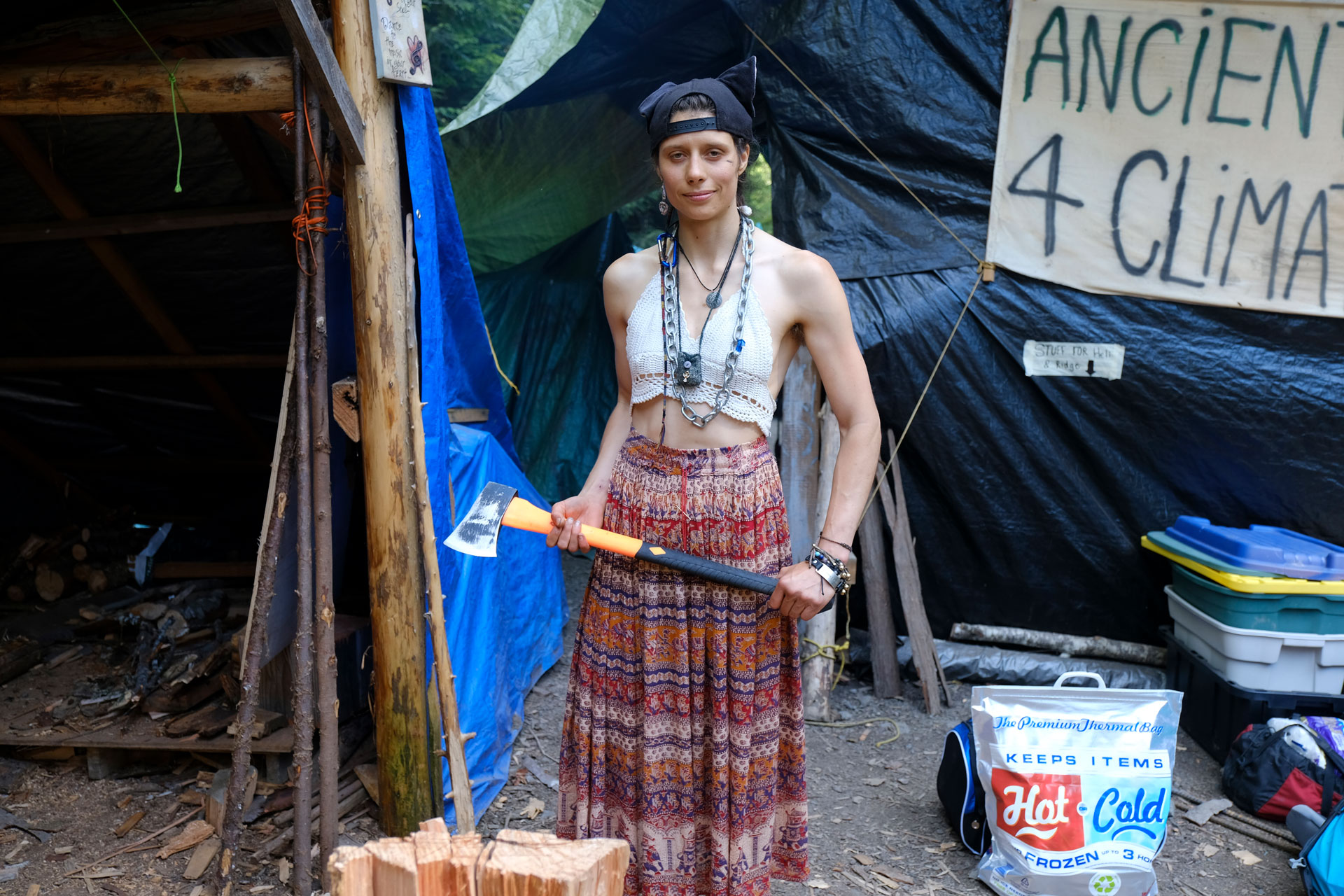 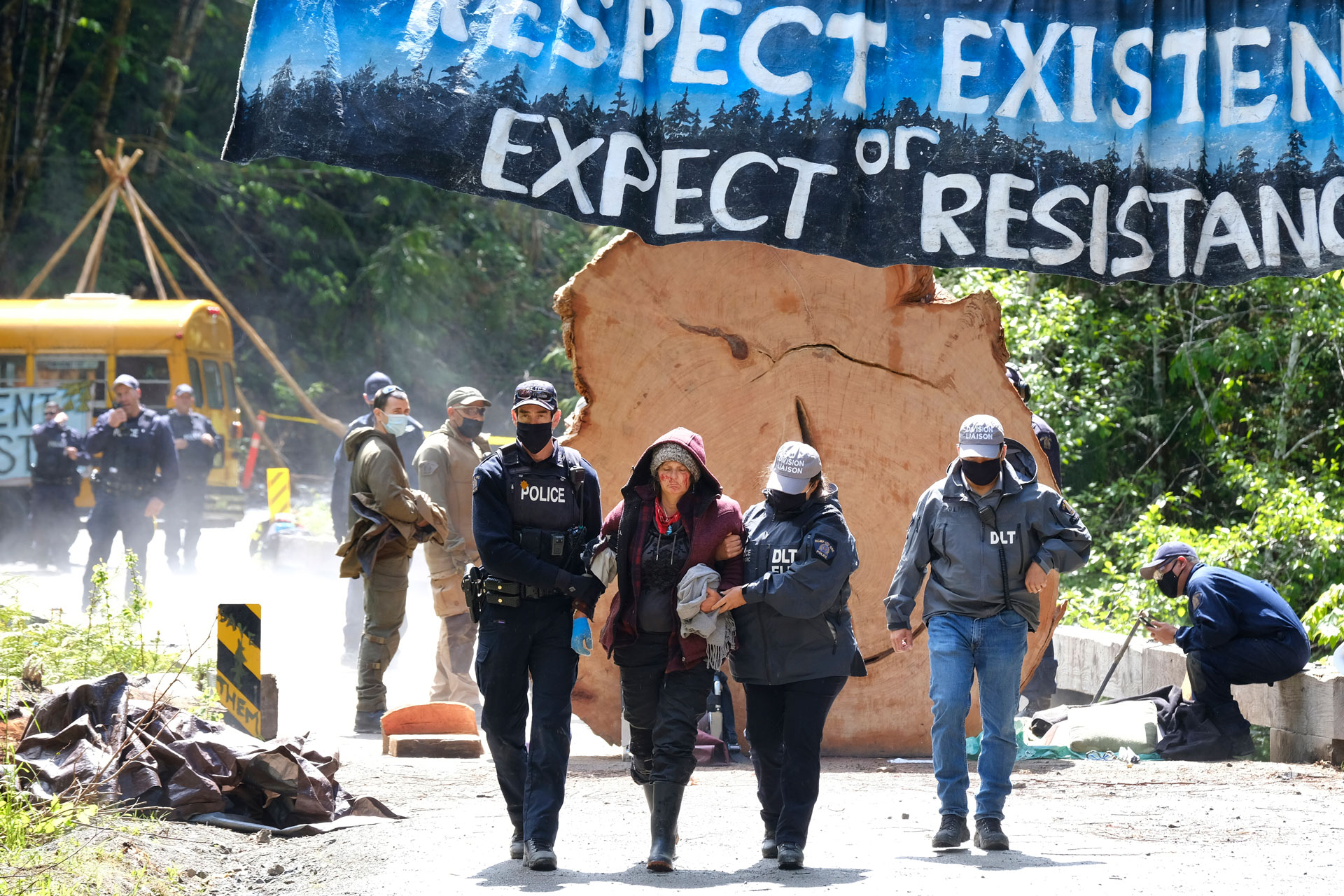 A woman is arrested for chaining herself into the large tree “slab” (a section of a stump) that is seen behind her. She was blocking a road that leads to old-growth forests that are not currently being logged since the police took down their camp. May 19, 2021. Outside Lake Cowichan, Canada. 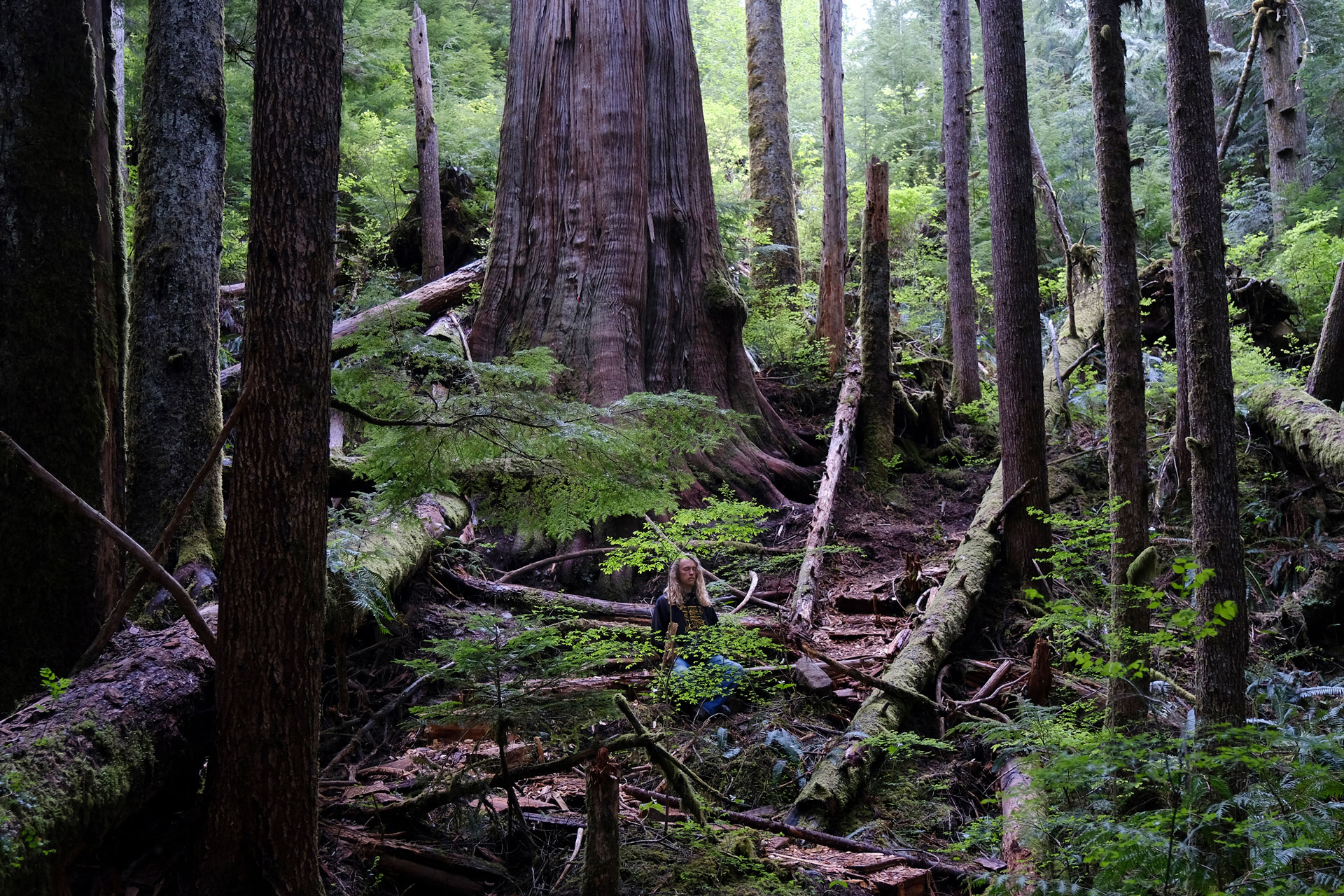 A forest defender sits in the woods to meditate near a very large tree. May 12, 2021. Outside Port Renfrew, Canada. 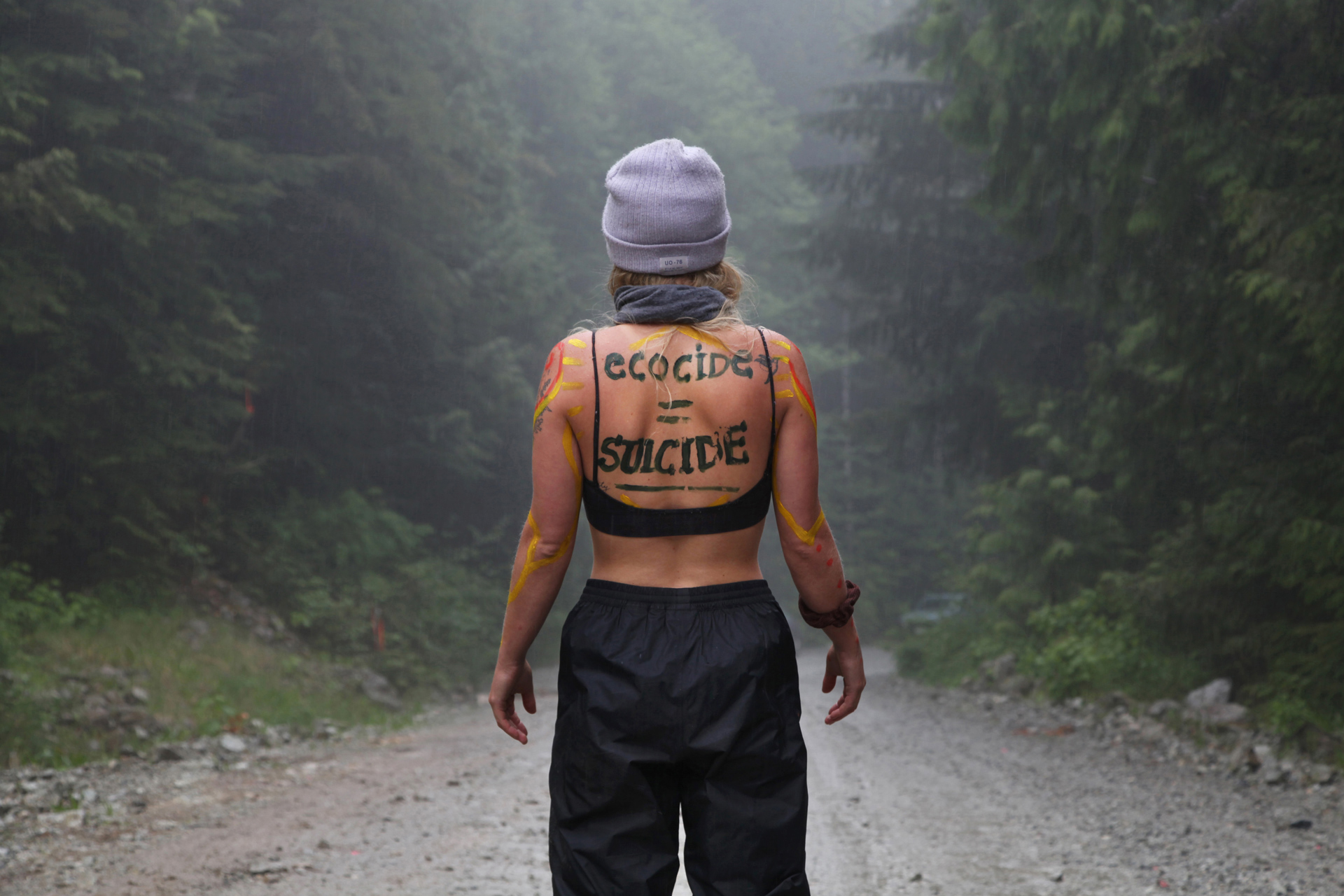 A woman appeared at the 2000 cut block road blockade to give her support to land defenders during arrests. They were blocking roads to prevent loggers from entering old-growth forest areas. May 24, 2021. Fairy Creek Area of Vancouver Island, Canada. 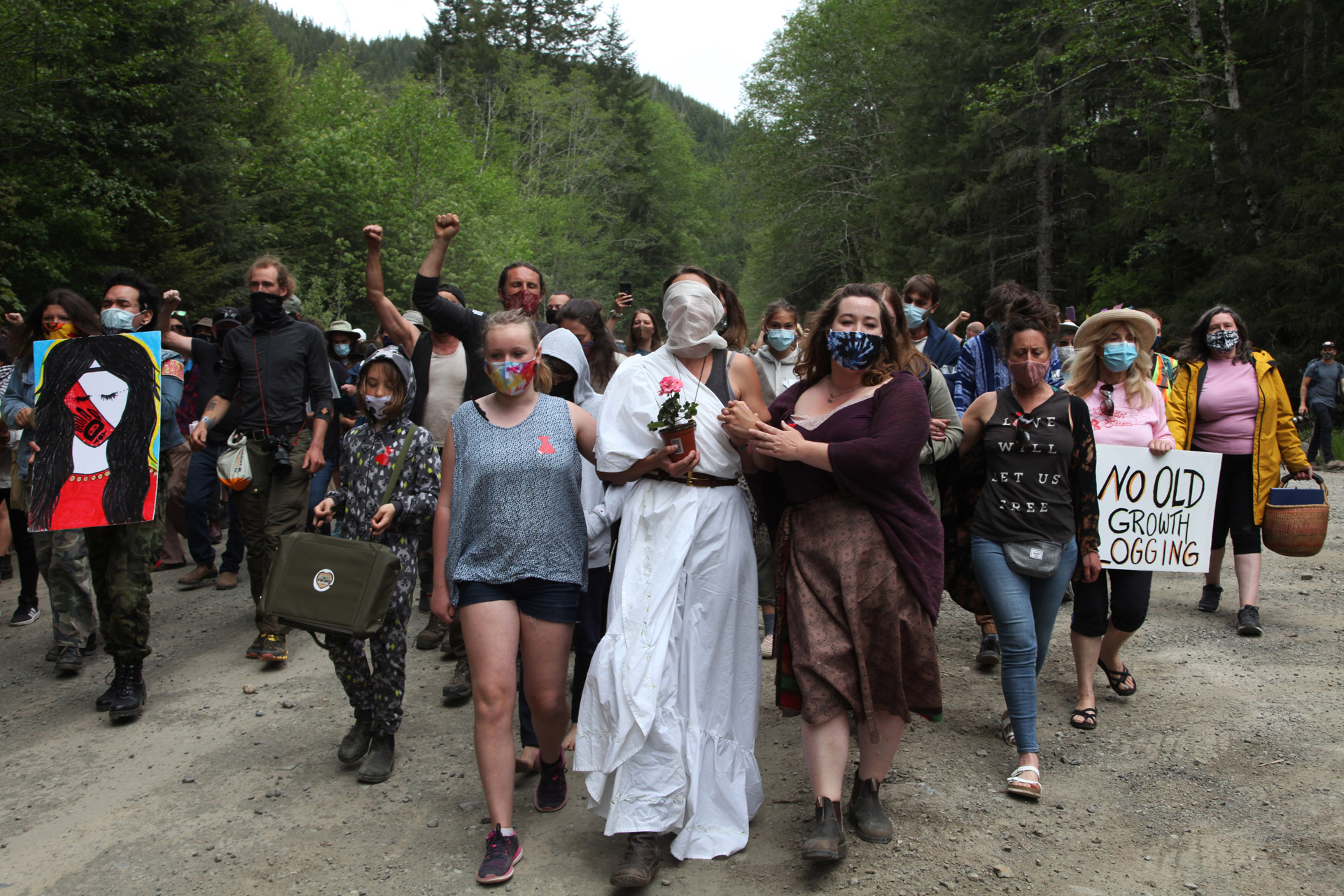 A group of forest defenders broke though a police line, which is a yellow taped line called an “exclusion zone.” They walked with the purpose of taking back a blockade, or at least making the point that “exclusion zones” are not acceptable. This happened approximately a week after the Cayacuse blockade fell to police and industry. May 22, 2021. Outside Lake Cowichan in the Cayacuse area, Canada. 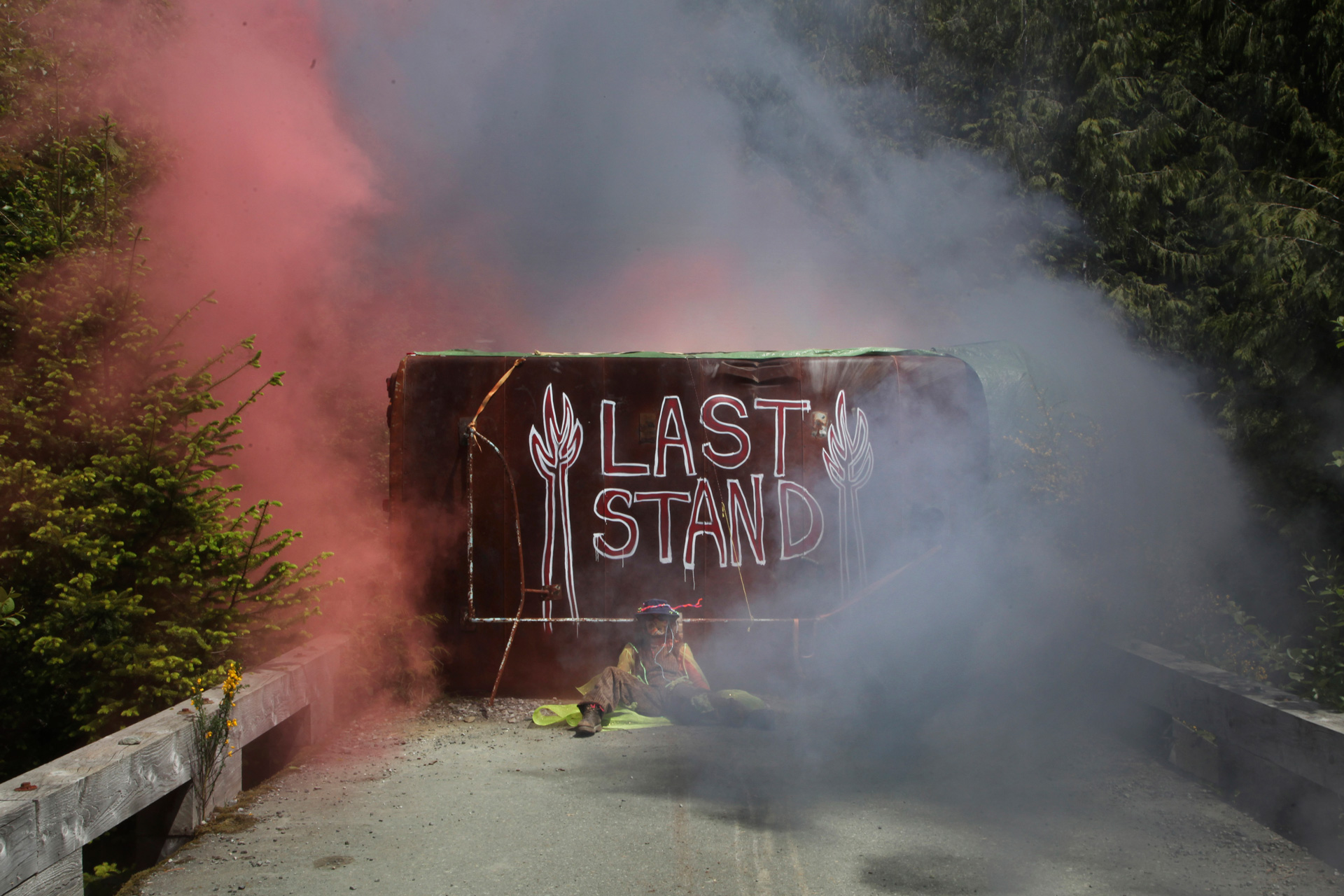 A land defender is chained to a bus, to blockade the road so loggers can’t access old-growth forests. Other members of the blockade set off flares, so that their internal film crew could post an interesting video to social media. The film crew was standing right next to me. May 2021. Outside Port Renfrew, Canada. 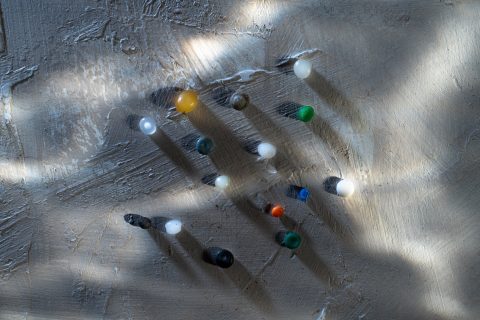 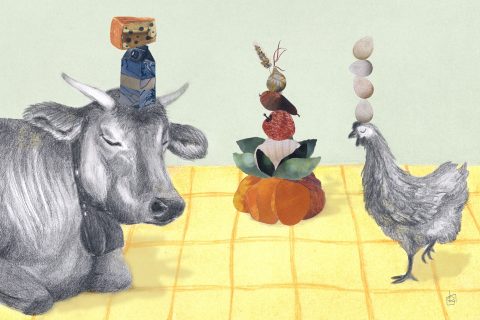 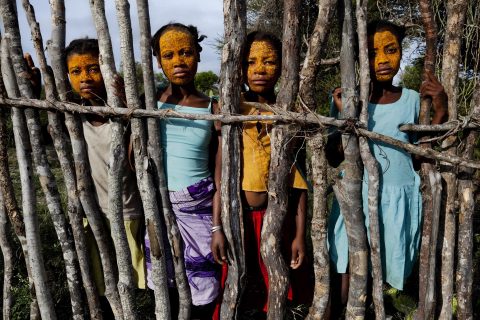 Madagascar Out Of Balance 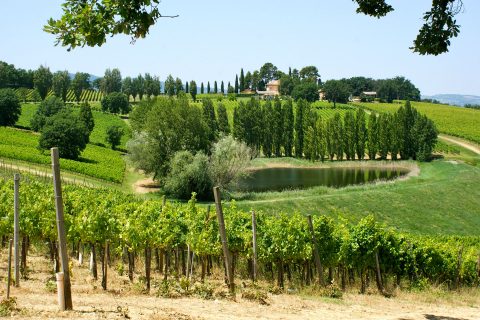 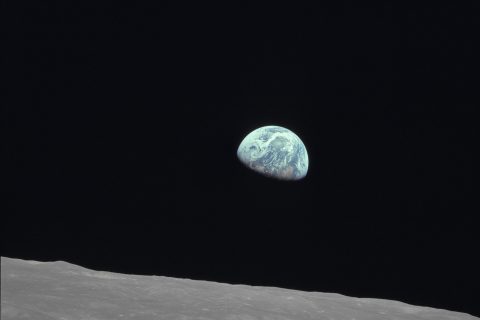 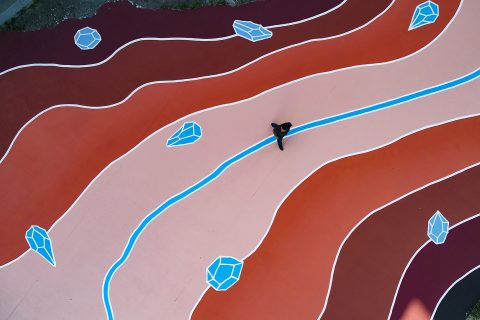 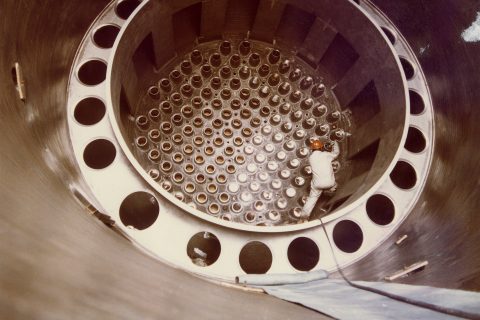 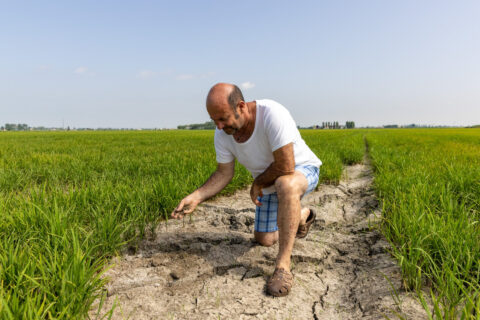 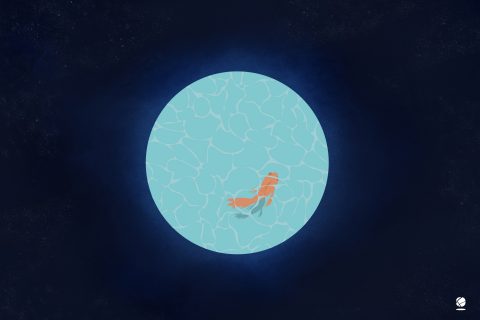 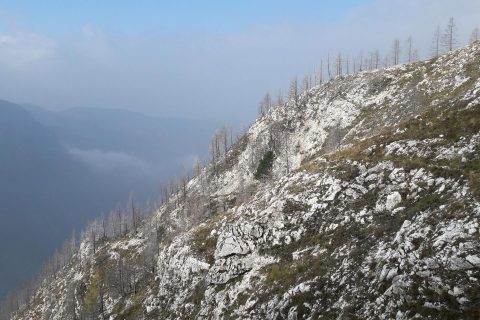