Written by Lisa M. Erdle, Marcus Eriksen
Photographs by Elisabetta Zavoli
Considering plastic in the sea only as an "ocean problem" is an outdated narrative that must be abandoned. The sources - the uses of plastics in society - are where the solutions must come from. 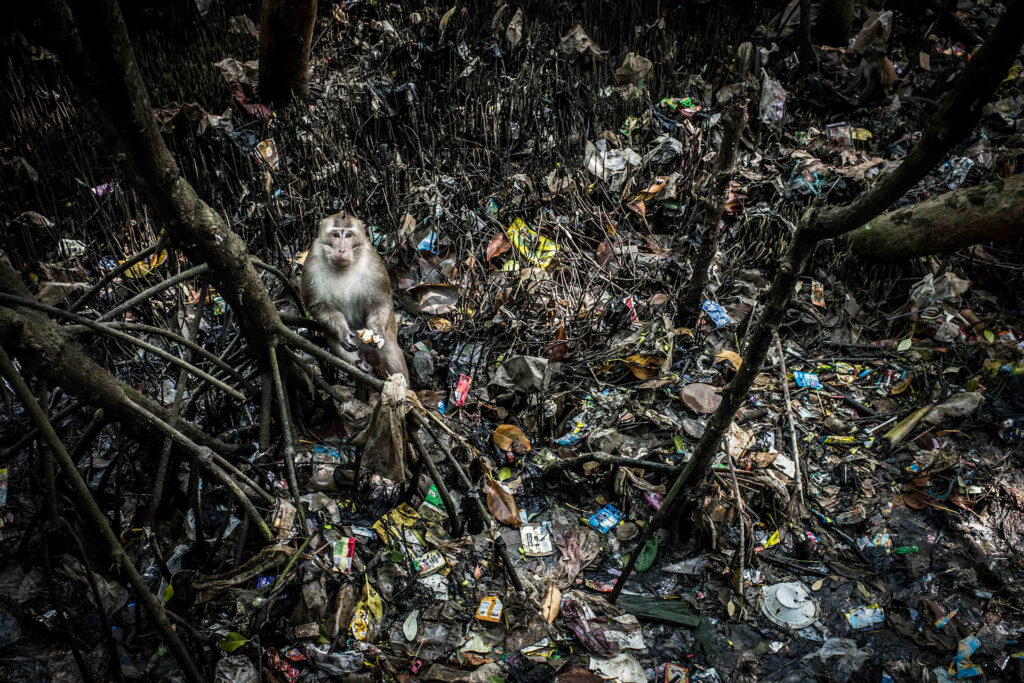 A grey monkey is looking for food among garbage inside "Hutan Wisata Kamal Muara", 99 hectares, Kapuk district, which is one of the few areas of pristine mangrove forests of Jakarta. This area is part of the city’s mangroves' green belt (total 330 hectares) and it is highly polluted by plastic waste coming down along rivers and canals. Jakarta, Indonesia, 2013.

In 2013, an expedition discovered abundant plastic microbeads from consumer products adrift in the Great Lakes of North America. At the time, the scientific understanding of microplastics was mostly focused on oceans, and secondary microplastics from the fragmentation of larger items. The highest reported concentrations were in international oceanic waters where accumulation zones formed in the subtropical gyres. While these initial observations from the gyres were generally shocking, they were in international waters, contained fragments from unknown items, and thus were seen as a tragedy of the commons; everyone and no one was responsible.

However, the discovery of plastic microbeads (a spherical primary microplastics, used as an abrasive used in consumer products like facial washes and toothpaste) was in national waters, and contained an identifiable product. The ability to recognize a specific source (recognizable by their size, shape, color, and chemistry), and an abundance of science demonstrating potential harm from microplastics (from laboratory studies), set the stage for a policy campaign.

Within two years of the initial publication, over 50 NGOs, universities, law schools, and political leadership had crafted federal policy. In 2015, former US president Barack Obama signed the Microbead-Free Waters Act. The string of events to ban microbeads showed that science and policy in a specific sector, primary microplastics, enabled a focused policy intervention upstream.

Plastic pollution, an issue of perspective

This targeted action resembled previous environmental policies, like those that led to tackle the issues of the hole in the ozone layer, smog over cities, and tar on coastlines several decades prior.

Even so, the problem of plastic pollution is still seen with an ocean-centric perspective, which fails to capture the complexity of the problem and thus hinders solutions. There is a diversity of plastic use in society – textiles to automobiles, fishing gear to agriculture – representing sub-disciplines, or “sectors” with varied material flows, sources, fate in the environment, impacts, and sometimes very different solution strategies.

If we can recognize sectors, then policymakers, business leaders and the public will craft more targeted mitigation strategies. A shift from generalizations about plastic pollution to specializations per sector will ultimately be more effective, and less prone to stakeholder bias.

Ocean cleanup: is it really the solution?

When plastic pollution hit mainstream media, the ocean captured public attention with headlines portraying harm to oceanic wildlife, floating garbage patches in the middle of the oceans, and mountains of waste on remote beaches. However, the ocean is one of many environmental “compartments” impacted by plastic pollution, including the seafloor, coastlines, cryosphere, rivers & lakes, all terrestrial environments, biota and even the atmosphere. The ocean compartment is truly downstream, and is often the end of the line for plastic pollution.

The initial public shock from ocean plastics inspired knee-jerk reactions to address the crisis at the point where the harm was observed, rather than the upstream root cause of the issue, therefore calls to cleanup and recycle dominated the narrative. Today, science tells us plastic pollution effects are far broader and more complex than oceans, impacting many compartments and coming from many sources. There’s precedent from the past to guide us in solutions.

A matter of prevention

Decades ago, the planet was plagued with global-scale problems, such as smog over most large cities, the hole in the ozone layer, and clumps of tar washing ashore on coastlines worldwide. These were solved when downstream impacts were met with overwhelming scientific understanding of the problem leading to upstream policy interventions. Smog was met with emission controls on vehicles and power plants in most developed countries. Chlorofluorocarbons (CFCs), a common refrigerant that reacts with ozone, was banned. Maritime law prevented oil tankers from dumping excess crude oil at sea after delivering their load to refineries.

These policies were effective since they were focused and specific to drive policy at a global scale. However, in the case of plastic pollution, there is too much complexity for a single solution to be effective. Therefore, we must first divide the plastic pollution issue into sectors in order to conquer it.

READ ALSO: The true history of the Selk’nam people

A solution for each sector

Plastic is a diverse suite of contaminants, containing many different polymers, chemical additives, and pathways in the environment. Furthermore, depending on the type of plastic and the environmental compartment it enters, the ecological, social, and economic impacts can differ. Due to these complexities, how policymakers address tire crumb is a very different conversation than mitigating plastic waste impacts from primary microplastics or pellet loss.

The 17 major sectors of plastic use in society.

Public, policy, and private industry conversations about mitigations must first identify the sectors they wish to solve for, as each sector will have its own suite of tailored strategies. A sector framework will contribute with the development of tailored solutions with more effective intervention points, shifting attention from downstream to upstream sources of plastic.

It will also sharpen a focus on unique material flows (e.g., tire rubber vs. PET microfibers), and curate better informed science advisory groups with specialists covering all types of plastic. It will reduce the risk of scientists who are generalists, or off-topic specialists, from presenting outdated science or misrepresenting what is known, resulting in stakeholder assumptions that there’s “not enough science to act”.

Shifting from generalists to specialists

With the exponential increase in research on plastic pollution, many scientists today have become specialized in specific niches. Scientists may devote their attention to certain aspects of plastic pollution research, but are not qualified to answer all questions on plastic pollution. Take for example a legislative debate about a specific contaminant in the environment, like tire crumb in cities; it would be ill-advised to have a scientific advisory panel consisting of researchers that study the fate of plastic fishing gear in the oceans.

A scientist who is an off-topic specialist, or a generalist without an expert understanding of tire crumb, would be less equipped to counter stakeholder claims about scientific consensus or the significance of harm, especially considering that stakeholders from industry drawn into policy debates are often specialists themselves. A poorly curated scientific advisory panel for public, private, or policy campaigns could inadvertently introduce bias (e.g., by providing outdated information, or aid subjective stakeholders by creating a perception of a lack of knowledge in the scientific community).

This also holds true when private enterprise seeks an expert opinion on new products and aims to avoid harm from materials, packaging design, or a new business model. The plastic pollution generalists, or off-topic specialist, may do more harm than good.

Solutions proposed to address plastic pollution range from recovery in environmental compartments to policy to reduce plastic waste at the source, with many other propositions in between. Each solution carries a cost/benefit, with costs and potential harm. 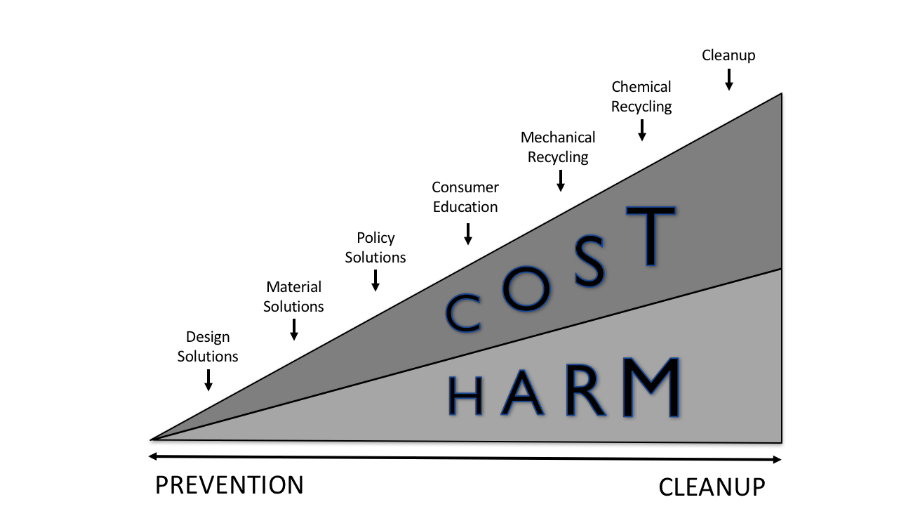 The range of solutions to plastic pollution each carry different financial costs and impact measured by reduction in demonstrated harm.

The volume of research on plastic pollution continues to rapidly expand, with sub-disciplines naturally emerging, though a more overt division by sectors is needed. New journals have recently emerged (e.g., Microplastics and Nanoplastics Journal) and new coalitions have formed (e.g., fishing sector, textile sector, single use foodware). There has been some specialization in plastic pollution, but the field would benefit from a more concerted effort to form coalitions, scientific journals, and conferences in each sector. This will not dilute the overall goal of all sectors to eliminate the harm from plastic pollution, or silo all research, as sectors will come together during larger international conferences on the issue.

We’ve already suffered a decade of distractions. The ocean-centric view with the image of mythical “garbage patches” largely drove public and private interest in plastic pollution. This inadvertently spurred downstream interventions with well-intended, though ill-conceived, assumptions that cleanup is paramount.

Framing cleanup as the primary solution came from two directions. The first, unintentional by default, due to the common misconception that solving a problem happens at the same place where the harm occurs, driving public interest and crowd-sourced funding. The second, intentional, with private stakeholders embracing the distraction to divert attention and responsibility from their industry. A few organizations formed, like 4Oceans and Ocean Cleanup, influenced by pop-culture ideologies aimed to solve the plastic pollution problem by mitigating the environment where trash resides, focusing on clean-up in environmental compartments, with minimal contributions to date.

We argue that environmental compartments are for monitoring, whereas mitigation happens at the source, or responsible sector. We have seen a rapid expansion in environmental monitoring; efforts are in place around the world to monitor polar sea ice, sediment, soil, sea water, lakes, rivers, wastewater, the atmosphere, and biota. However, insufficient attention has been paid to developing and implementing solutions close to the source. Deconstructing the complexity of sectors and compartments will enable mitigation strategies to be more efficient and appropriate.

“Let me refer you to a specialist”

Scientists must take the lead, as they are experts on the diversity of chemistry, material flows, receiving compartments, and impacts. By identifying sectors of plastic use in society, scientists can better serve policy, private, and public dialogue in actively bringing the right experts to the table. Scientists have a responsibility to communicate their work, and to point to others when other expertise is needed. Much like how medical practitioners say, “Let me refer you to a specialist”, researchers of plastic pollution should also direct policymakers and the public to sector specialists. In time, this will likely create a culture where future stakeholders curate their own advisory groups with the right scientists specializing in textiles, tire crumb, fishing gear and so on, as needed.

Policymakers should know the sectors of plastic pollution they are attempting to legislate and invite specialists to inform decision-making. Curating an informed group of experts will help keep stakeholder bias in check by addressing claims, challenges to the science, and providing context to impacts in question. For product developers, a common objective is to minimize harm from the design of new products or packaging. A generalist might overlook the most recent and specific evidence of harm that should be avoided, whereas a sector expert would not. NGOs creating communications campaigns directed at a sector risk misinformation through outdated or incomplete knowledge if advised by a generalist.

Much like other scientific disciplines, increased knowledge results in diversity of thought. We’ve already seen specialization in engineering and medicine, which gave rise to subdivisions within these fields. Plastic pollution should follow these examples to facilitate and expedite better mitigation strategies. There is no time to delay.