Madagascar Out Of Balance

Written by Ed Kashi
Photographs by Ed Kashi
The people of Madagascar are dependent on the depleting forests. A precarious balance between environmental conservation and poverty. 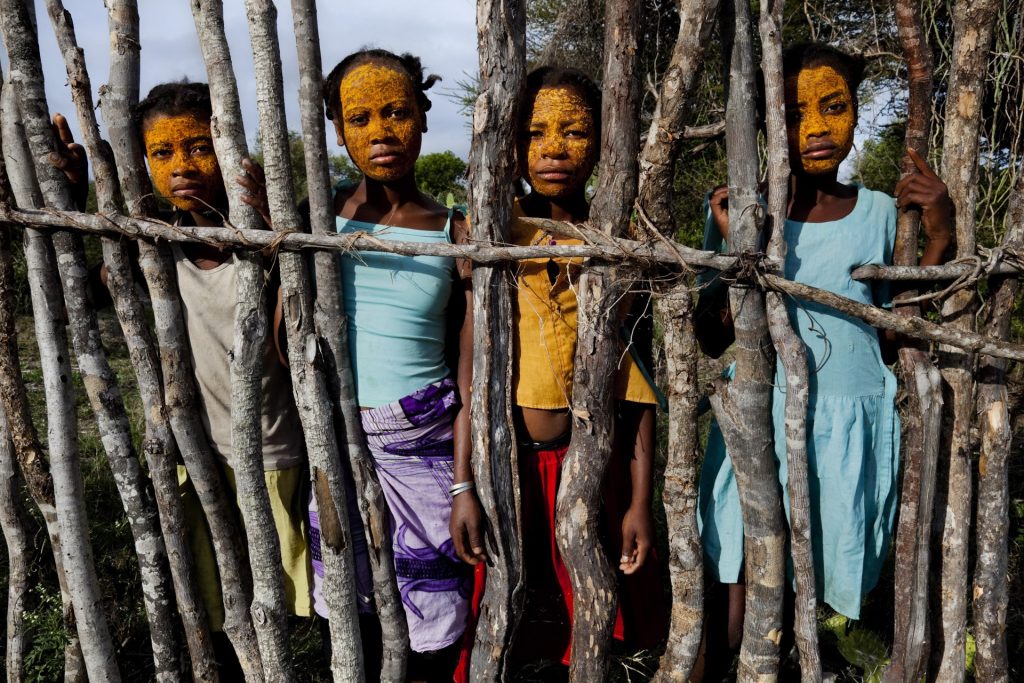 These young girls, ages 11-13, use a paste made from teh tsiambara plant's roots to beautify their skin. They usually leave it on for 5 days and keep on redoing the process except on market days. The meaning of this process is called "I don't want to show you". These images have been made for the 2010 Prix Pictet Commission, working in cooperation with the United Kingdom based NGO, Azafady, to show issues around land, forests and poverty in this region of Madagascar. The purpose of the images and stories collected here are to illustrate the lack of develoment and Azafady's efforts to promote sustainable development to improve the lives of the people and how the land is used.

With a growing inequality in living standards that sees the wealthy flippant in their excess, the voices of those without are growing in number. As a result, they are clambering to be heard as the precious resources upon which their existence depends are depleted beyond repair at an alarming rate that cannot and will not be sustained. Nowhere are the effects of this dysfunctional relationship more evident than in Madagascar.

This project is in direct response to the global cry to stop and take responsibility, seen through the dignified and vibrant people of south east Madagascar, in a cross-examination of the intricate ties that bind them to the earth.

For the Malagasy, everything that is needed to sustain human life comes directly from the earth. It is their food, their shelter, and more often than not their only source of income. And holding it all together in precarious balance, is an astoundingly depleted forest system.

Systematically plundered over the years by both external forces and the attempts of the island’s inhabitants to sustain their way of life, Madagascar’s forests now total less than 10% of their original status, existing in small, scattered fragments that are home to hundreds of endemic species, many of which are yet to be named or even discovered.

THE FOREST-BASED SURVIVAL OF MADAGASCAR

It is these forest fragments that provide a livelihood to more than 70% of the island’s population. Despite recent conservation laws established to protect the forests, the people of Madagascar, caught in a cycle of grinding poverty that eradicates the luxury of free will, continue to risk fines and imprisonment in pursuit of their forest-based survival.

My work has always been predicated on preserving the dignity of my subjects, something the Malagasy have in abundance, and I found in Azafady an approach that very much mirrored my own. As a result, within this selection of photographs you will see not only the problems that Madagascar faces, but the holistic and sensitive solutions that are being offered in response by agents like Azafady.

No longer in photo journalism is it sufficient to document only the challenges, rather we need to empower each other through examples such as these to show just how great the power of collective action can be, and answer the global cry to stop and take responsibility. My heart felt thanks goes out to Prix Pictet, Azafady, and the people of Madagascar for giving me the opportunity to do just that. May it also empower you to do the same. 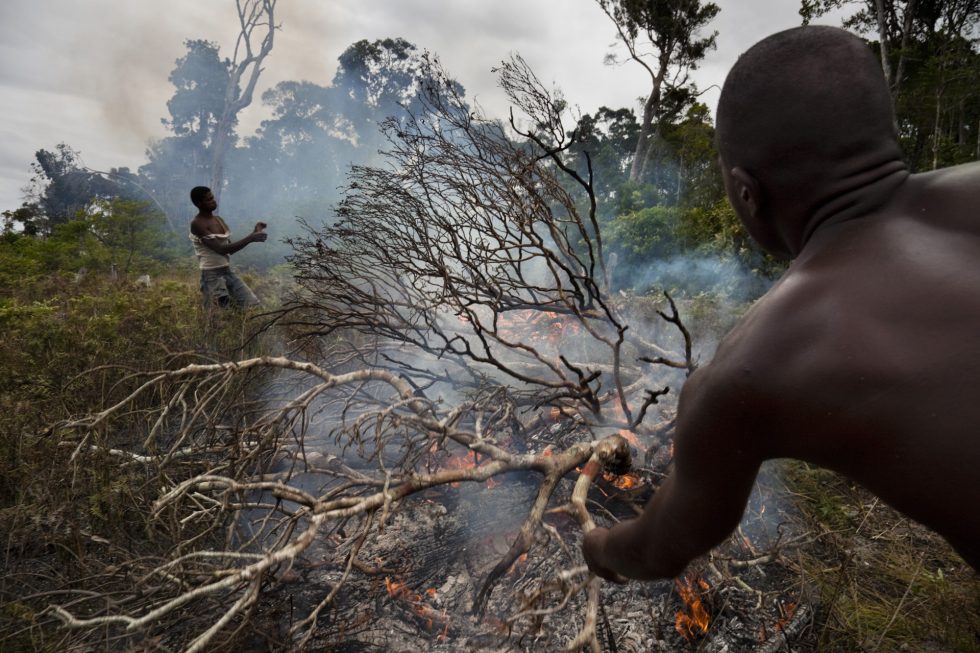 Tavy, or burning of the forest to clear for planting, done by farmers in Analavinaky, near Sainte Luce along the coast of Madagascar on Jan. 12, 2010. Tavy is illegal but local farmers continue to do this despite the massive reductions of their forests. 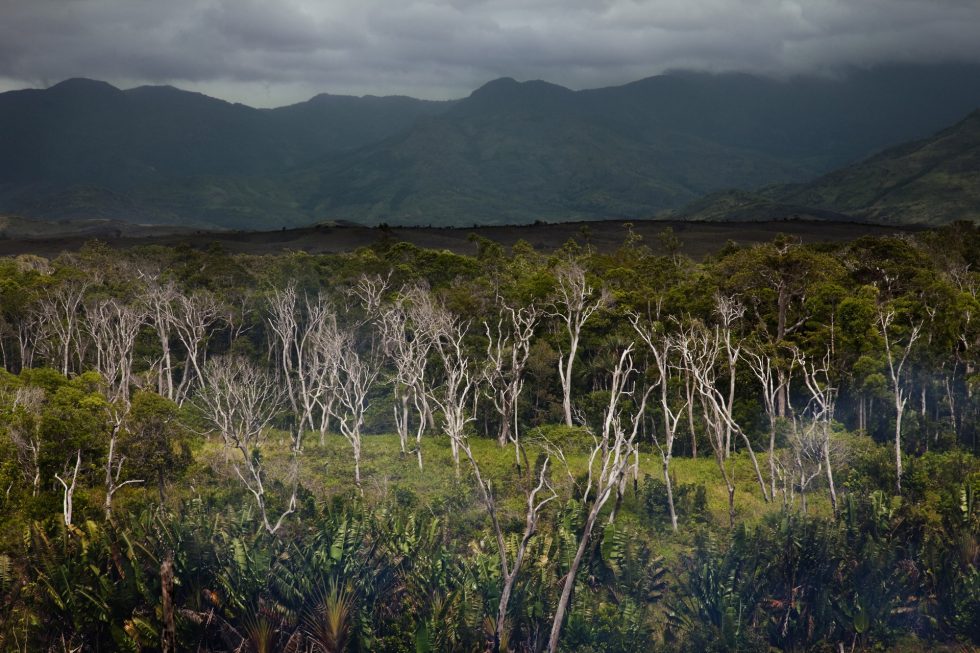 The smoke of Tavy over the forest. In the distance is one of the few remaining native forests of the region. As the people cut and burn more of their forests, they must go further and further out from their villages to collect wood for their buildings and fires. 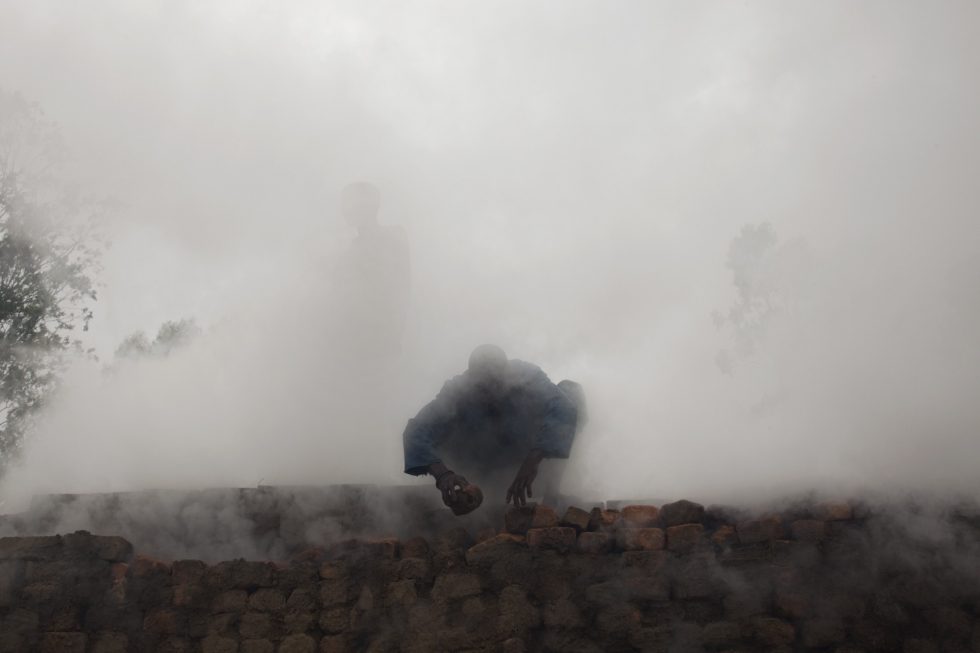 At a brick kiln, smoke shrouded workers survive on making bricks for the local construction trade and for use in their villages in Anosibe, Madagascar on Jan. 14, 2010. This is a very inefficient use of wood, which is the main source of fuel to burn the clay to make the bricks. 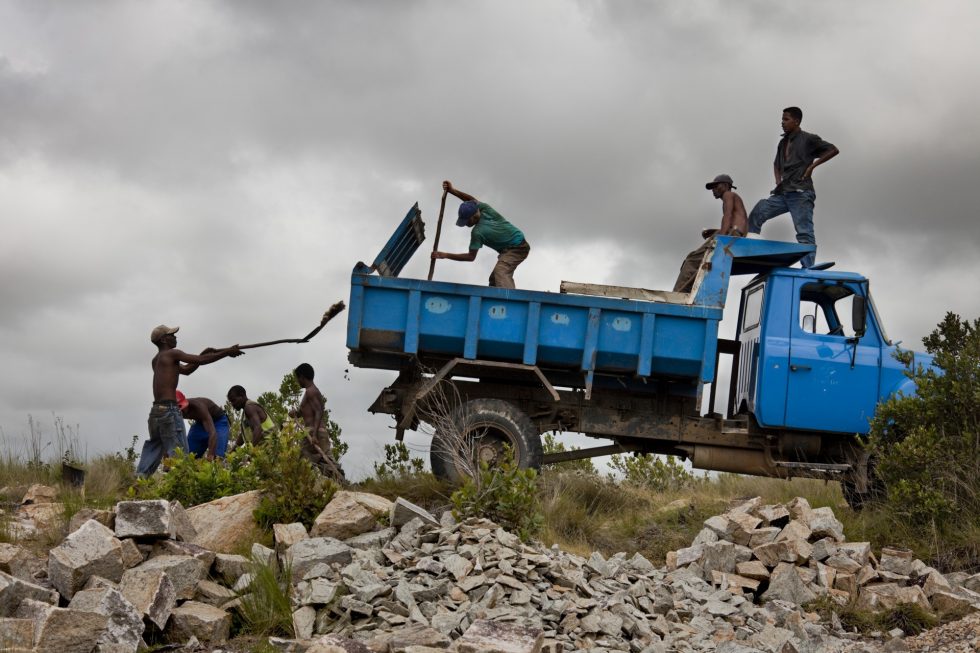 Men working in the relatively new business of breaking the rocks of the area and selling as stones and gravel for road building and construction in Sainte Luce, Madagascar on Jan. 13, 2020. Another example of the land providing a resource for the local people. 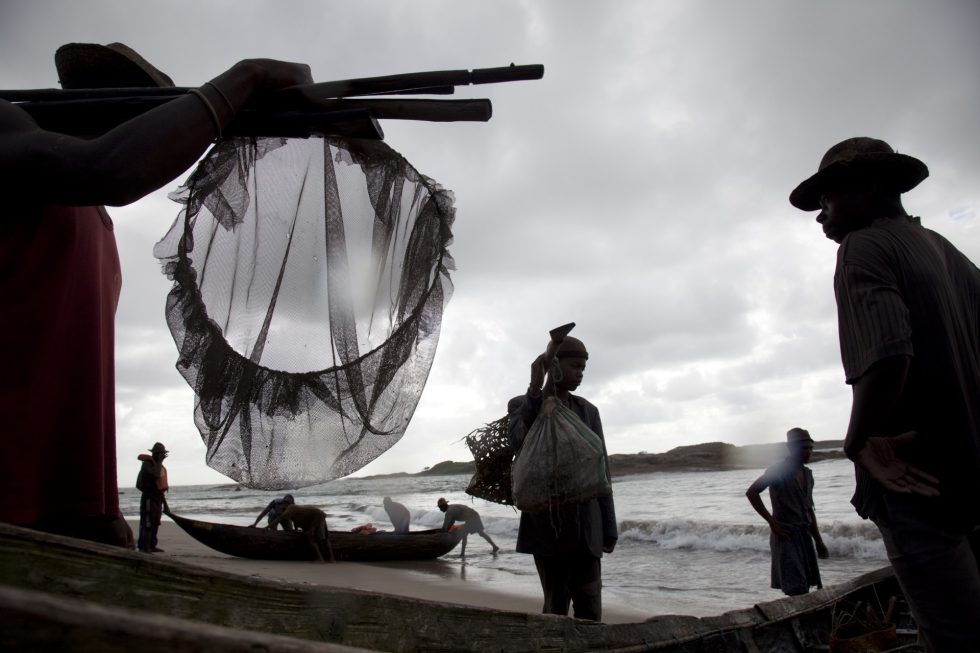 Fishermen return with their early morning catches in the fishing village of Sainte Luce, Madagascar on Jan. 13, 2020. The catch consists of mostly lobsters and assorted fish. These lobsters are for export to the European market. Then, lobster and fish catches are reduced and the fishermen have to go farther out to sea then they have traditionally. Thus, their work is now more dangerous and it reflects a growing threat to their livelihoods.

Local villagers fish for saifotsy in the Anony Lake in Tanandava, Madagascar on Jan. 15, 2010. This is an estuary which is fed by the ocean. These villagers usually farm, but due to a lack of water they must resort to fishing. Here, they are using mosquito nets provided by USAID for fishing, which means they are catching everything, which is further depleting the lake’s fish stocks. They use sisal rope with their nets. 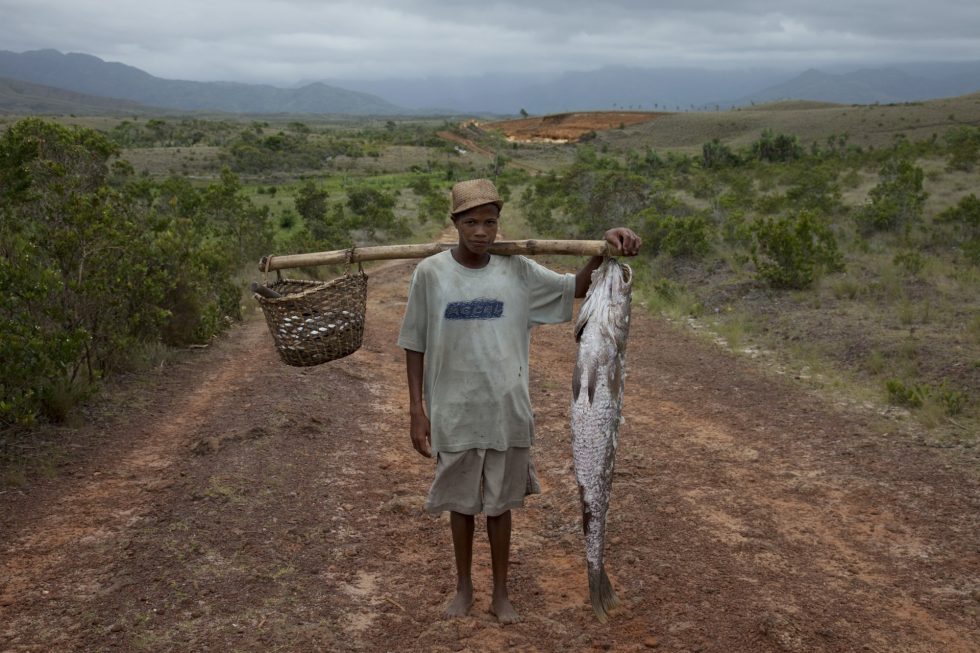 A fish runner outside the coastal town of Sainte Luce, Madagascar on Jan. 12, 2020. Fish runners generally pack their baskets with the fresh catches of the day and then run for more than 3 miles to get them to trucks that will take the fish to markets around this part of Madagascar. 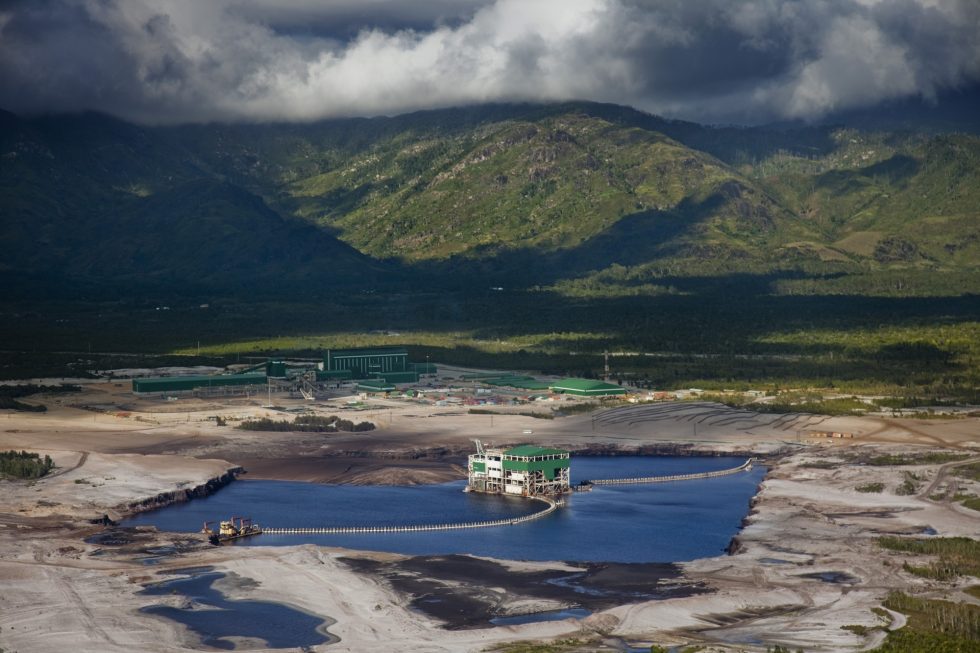 MINING AND FARMING IN MADAGASCAR

This is the ilmenite mining operation for Rio Tinto in Fort Dauphin, Madagascar on Jan. 17, 2010. The scarring to the landscape is evident and this is only the beginning of their operations. Huge swaths of land will be turned into sand dunes unless the company is responsible with their regeneration program. 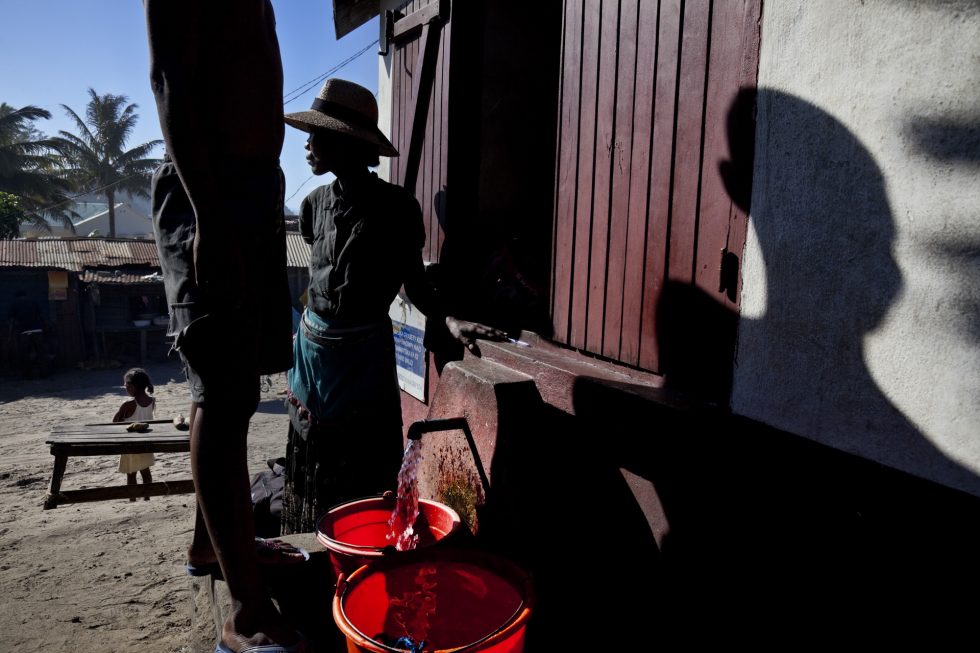 One of many water collection points that provide clean water for residents of the poor neighborhoods of Fort Dauphin, Madagascar on Jan. 16, 2010. Most of the town does not having running water. 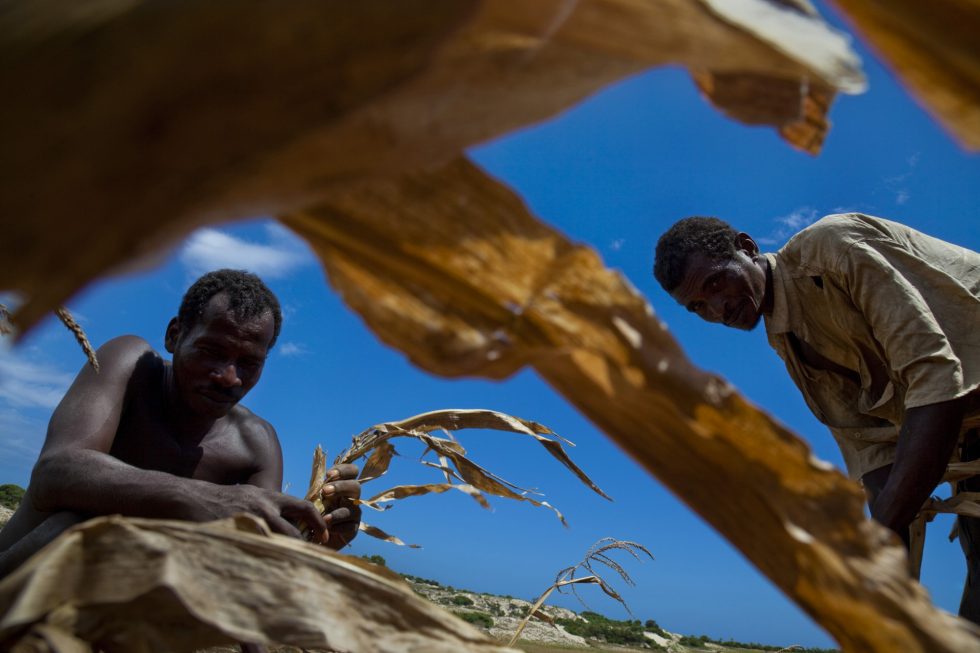 Farmers check their dead corn stalks, due to a lack of water in this region, in Agnalapatsy, Madagascar on Jan. 14, 2020. Farmers are now turning to fishing but the fish stocks are also down due to overfishing. These factors contribute to the malnutrition in this region of Madagascar and also the lack of resources for the people. 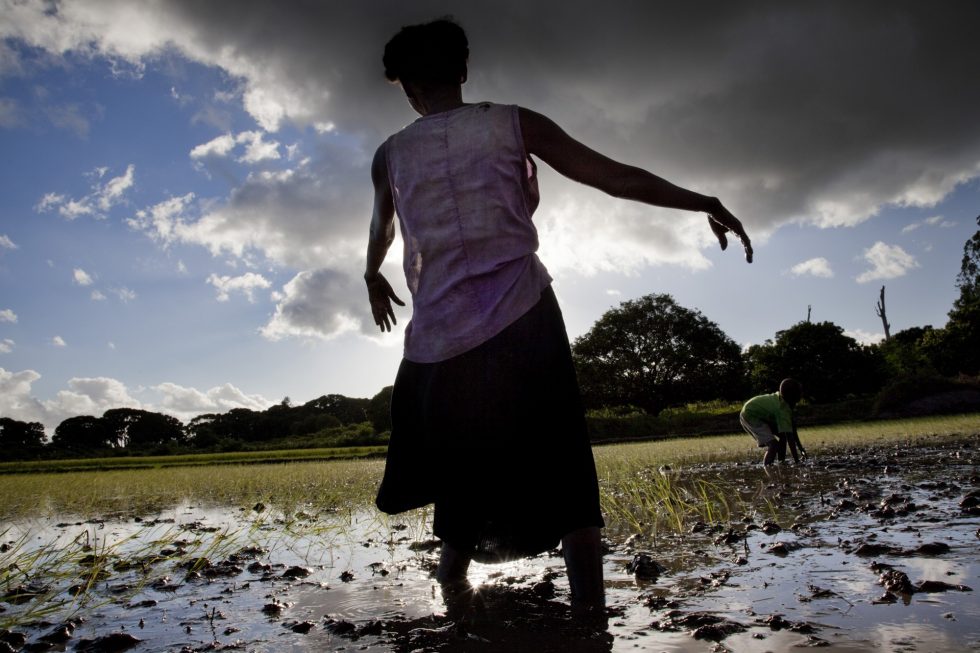 Local people plant rice in flooded fields in Maromitsioky, Madagascar on Jan. 10, 2020. Rice is sacred and an essential part of one’s daily nutrition. For the Malagasy rice represents life. 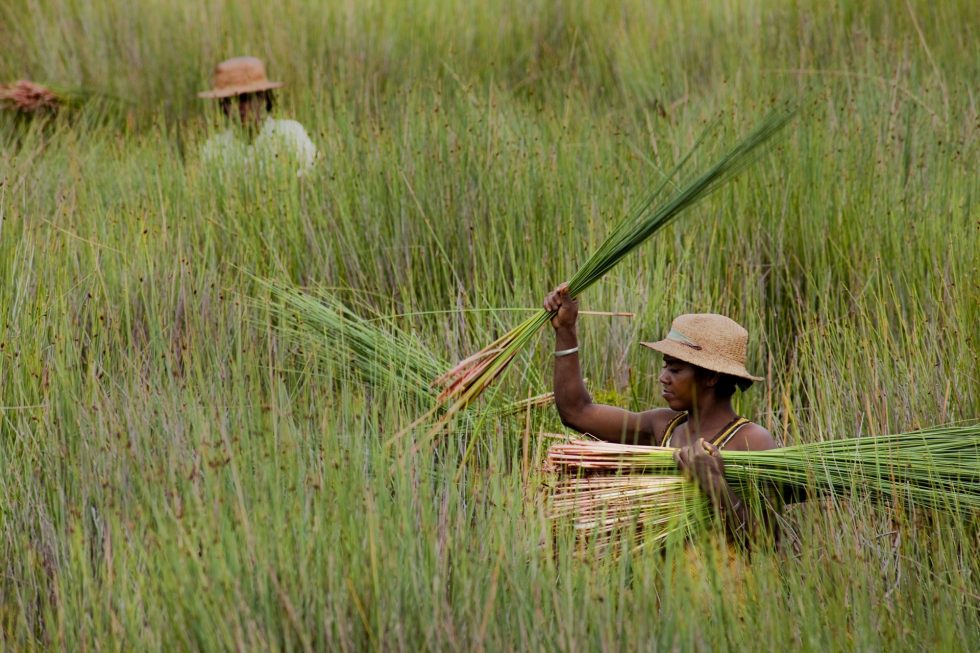 Village women gather reeds in swamps to be used for mats, baskets and hats in Analavinaky, Madagascar on Jan. 12, 2020. Like most of the things in their lives, it comes from the land. 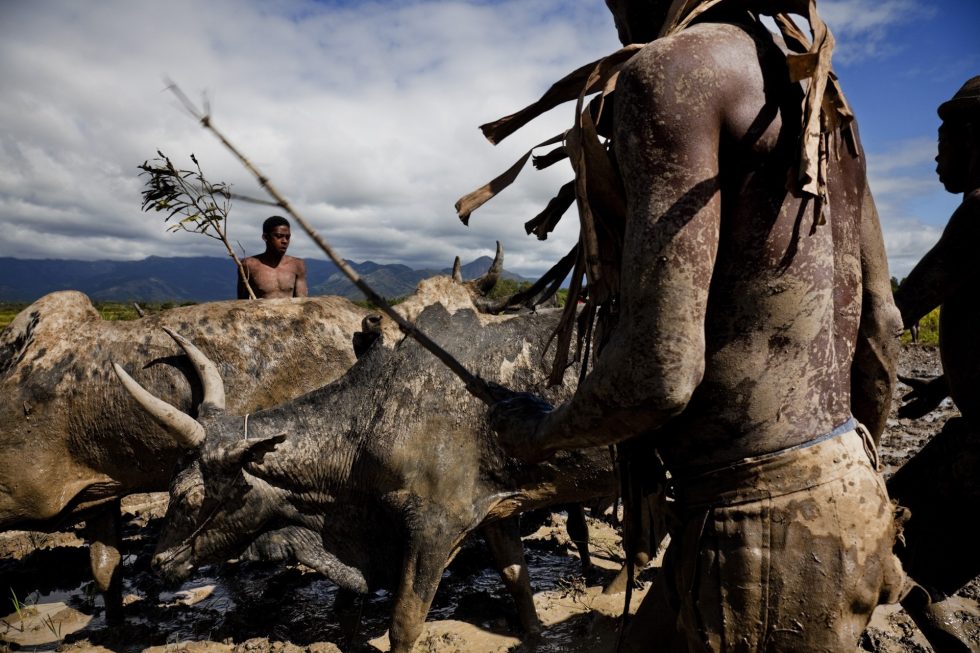 Rice farmers prepare their field for planting by using zebu (cattle) to soften the muddy earth so the young rice shoots will take hold deeper in the soil in Manambaro, Madagascar on Jan. 19, 2010. This is an ancient Malagasy tradition and is called magnosy. 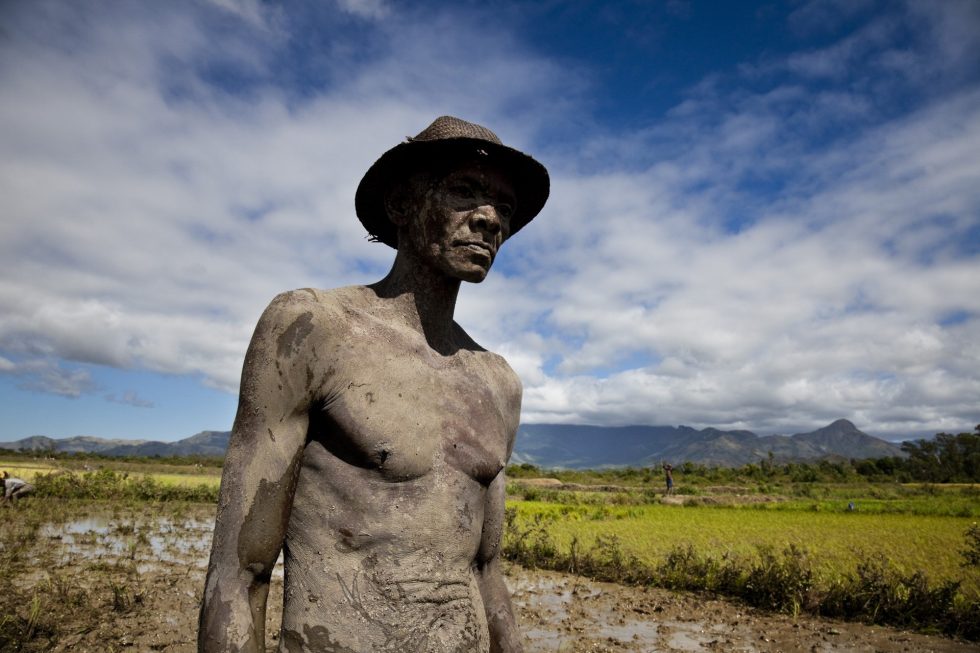 A rice farmer prepares the field for planting in Manambaro, Madagascar on Jan. 19, 2010. 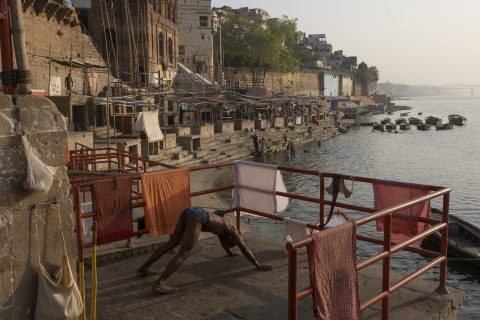 The arc of a name 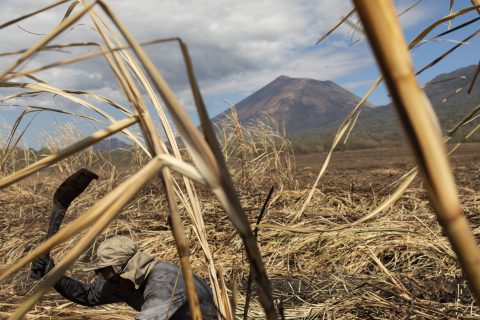 Working Towards Solutions to CKDnT in Nicaragua