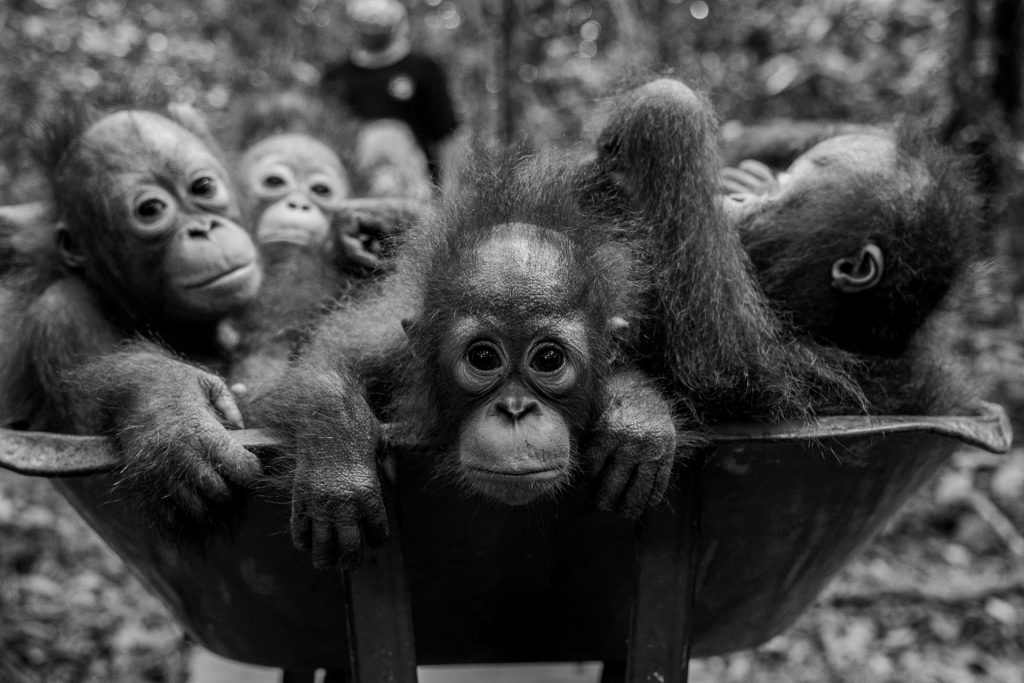 A group of baby orangutans are about to leave the forest school to return to their living quarters. They have spent half of the day playing and learning at the forest nursery school. Their dinner is going to be served before they settle down to sleep.

As a documentary photographer who also happens to be an animal lover, my main motivation has been to explore the different facets of the relationship between mankind and the animal kingdom. What speaks to me most is trying to capture the mysterious forms of communication that can and do exist between us.

I tend to spend a considerable amount of time portraying domestic and wild animals in the form of a photographic narrative. It is most certainly not just a matter of trying to capture images of animals looking cute. The relationship between animals and humans is complex even if there is a dependency with domesticated animals, in contrast with animals in the wild whose existence is threatened by human presence or activities. What I find particularly poignant is that the relationship between animals and humans moves from outright abuse to love and dependency.

Domestic and an increasing number of wild animals can and do benefit from compassionate and loving intervention by humans. A great part of my work attempts to depict this in action. The people involved are often rather under appreciated but it does not affect their devotion and passion in helping their charges by trying to improve their welfare and health. My intention is to try and create a photographic narrative on behalf of the animals and those who care for them.

In this photo essay I present a story about orangutans. Orangutans are unique animals which only exist in the rainforests of Indonesia and Malaysia. In my language, orangutan means “forest man”, a man who lives in the forest.

Orangutans are critically endangered species and they share 97% identical DNA with us human beings. They are under intense ecological pressure since their populations are in fast decline. They spend 95% of their time high above the canopy. Sadly, humans destroy their natural habitat, clear their rainforest for agriculture, hunt orangutan mothers and steal their cute babies for illegal pet trade. As a result there are too many baby orphan orangutans around.

At an orangutan rehabilitation centre in Ketapang, West Kalimantan, I observed innumerable orphaned orangutans of all ages in a secure and peaceful environment. They are being coached to learn how to survive and live in the way they should be; free and independent in the protected rainforest. They are taught to climb, build nests and find food. When they are ready, they are released back into carefully selected forest areas with the hope that they can lead a free and independent life. It will take some years (between eight to ten years) before these infants are ready to live independently in their natural habitat. 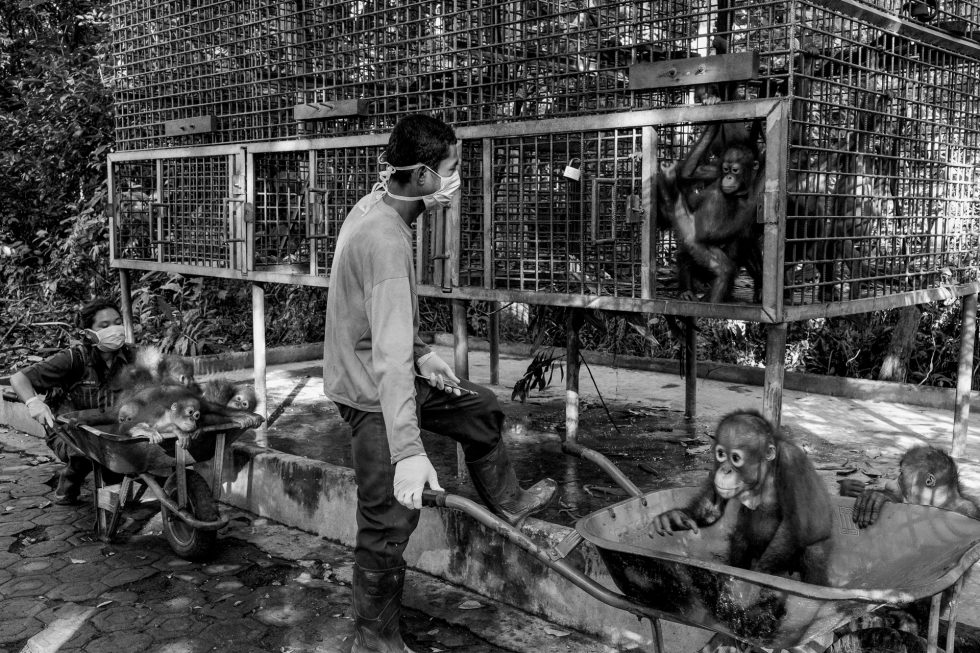 It’s morning and it’s time for them to leave for school. They play and learn at the same time in their protected forest school. They are taught the beginner skills they need in preparation for more advanced survival knowledge they will need when they are eventually released back into the wild. 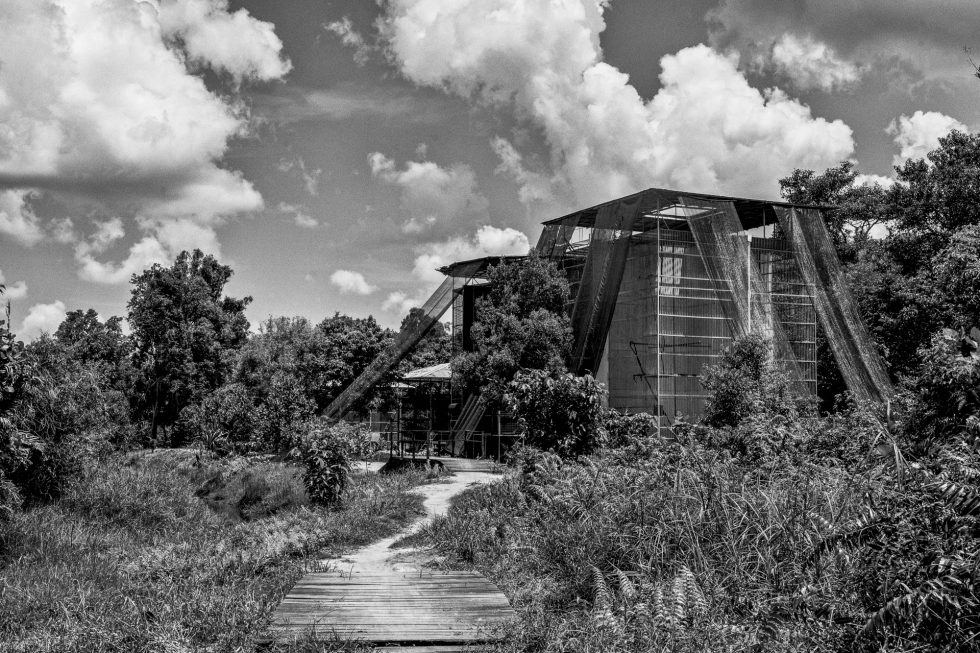 Two huge and tall cages were built to house two adult orangutans who have previously spent most of their life in captivity and so have a traumatic psychological past, thus they are judged unfit for release. Unfortunately in certain cases some of the orangutans raised as pets can never be returned to the wild, therefore the cages are the final home for them. 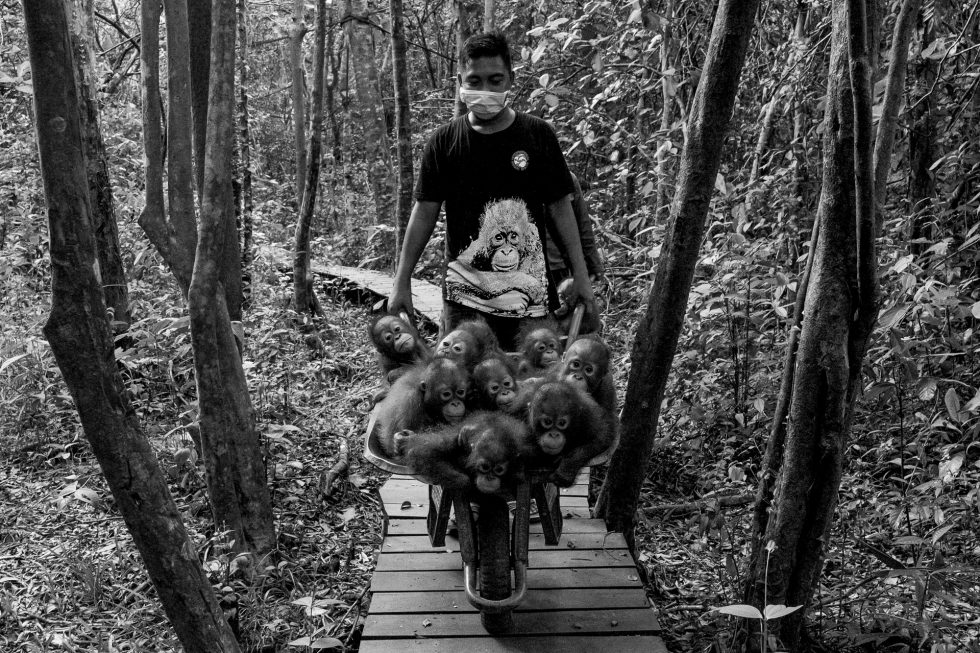 Orphaned baby orangutans are transported back to their resting place by wheelbarrow after spending their day playing as well as learning survival skills at the forest nursery school managed by the International Animal Rescue Indonesia Foundation. Wheelbarrows are commonly used in rehabilitation centres to transport baby orangutans. The ride is always enjoyed. 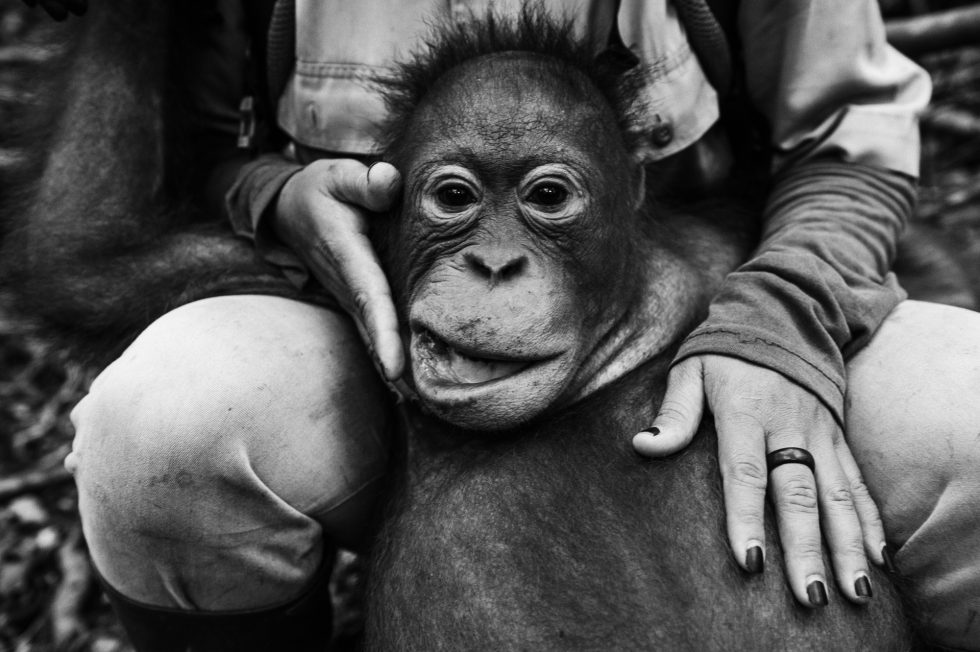 A portrait of a juvenile orangutan being cosy with one of the keepers. This orangutan, now in his teens, is living free in the reserve in one of the islands on the property. He is starting to learn the more advanced survival skills he will need to be released back to the real forest. There are four islands in the 150 acres property including this one, with two being reserved for the most advanced orangutans and where human contact is minimised. Although there are many female staff at this centre, especially at the clinic and with the baby orangutans, on the islands, both male and female keepers are required to cope with the robust juvenile orangutans. 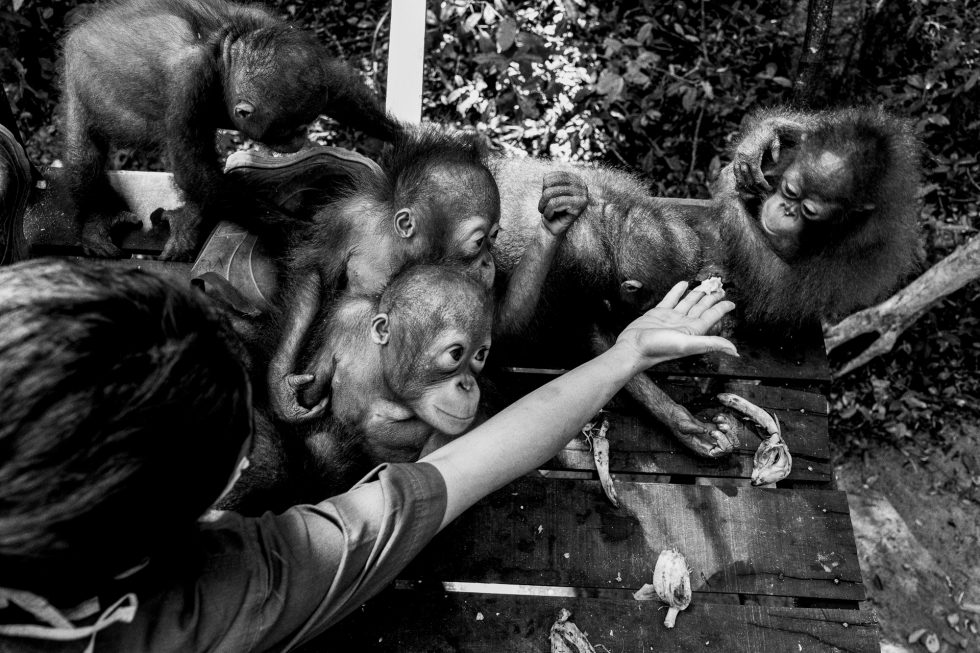 During break time at the forest nursery school, the pupils are rewarded with the fruit they like the best; in this case, bananas. 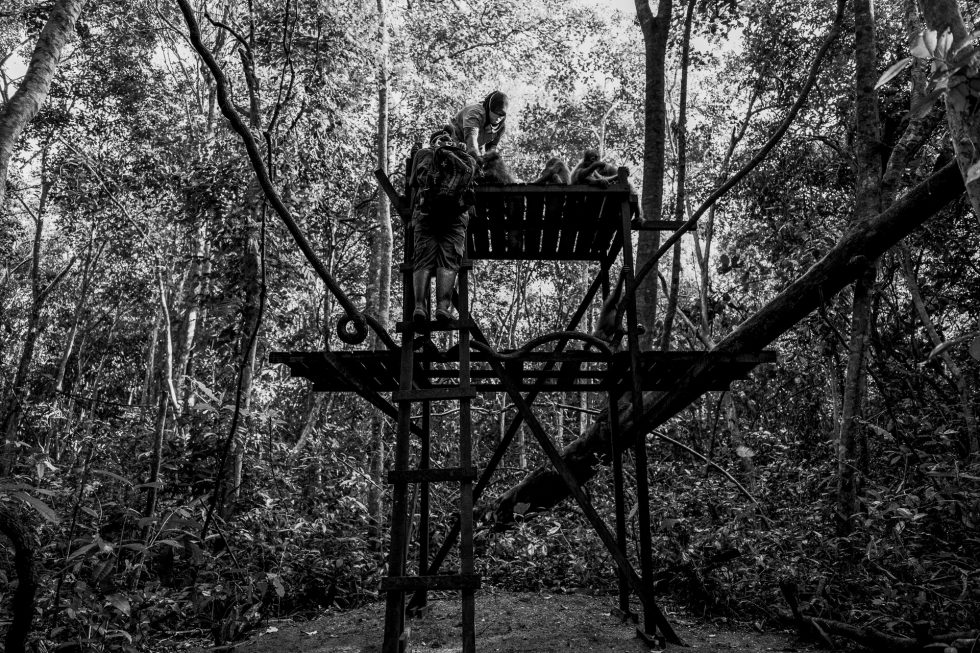 As part of the learning process, the rehabilitation centre has a tall feeding platform for them to climb up to and for the keepers to sit whilst attending to their charges. 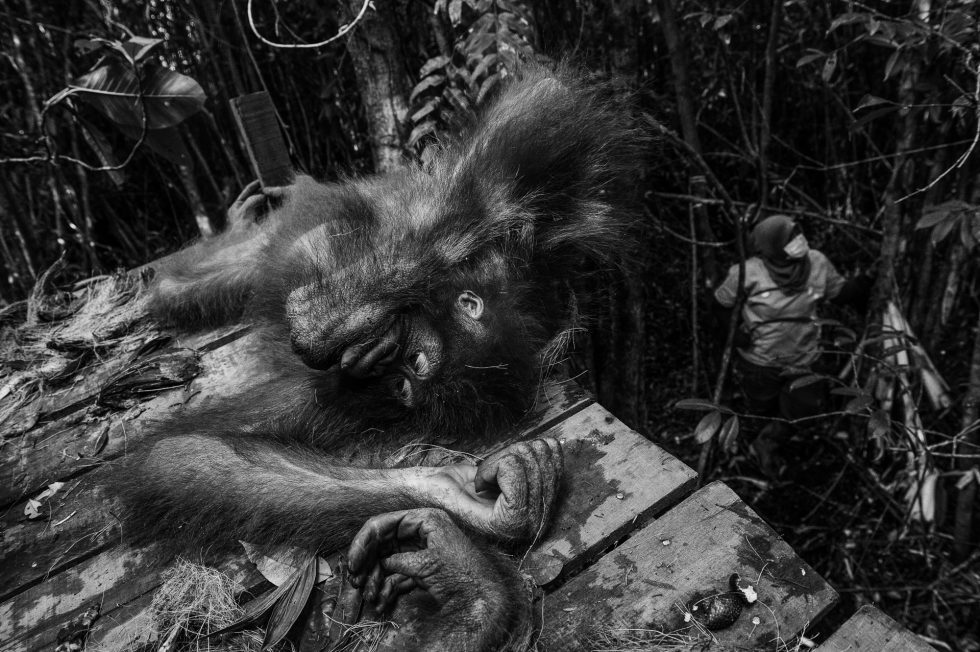 Two adult orangutans relaxing on the high rise wooden platform whilst the vet is observing from down below. These two live on one of the islands in this forest reserve as they are already at the intermediate stage of their learning abilities. They have developed their climbing and foraging skills to be able to fend for themselves when they are eventually released. 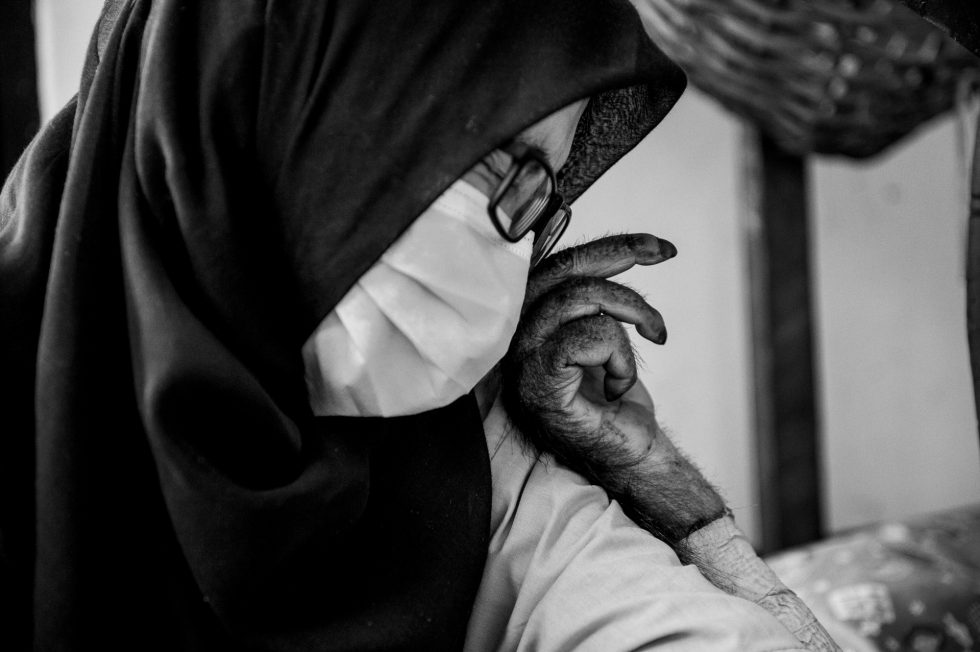 A baby orangutan, sick with tummy ache, has to stay in the clinic to be constantly monitored by the dedicated vet and nurses at the rehabilitation centre. Upon one of the nurse’s visits to the patient’s bed she is greeted with a loving touch on her cheek. 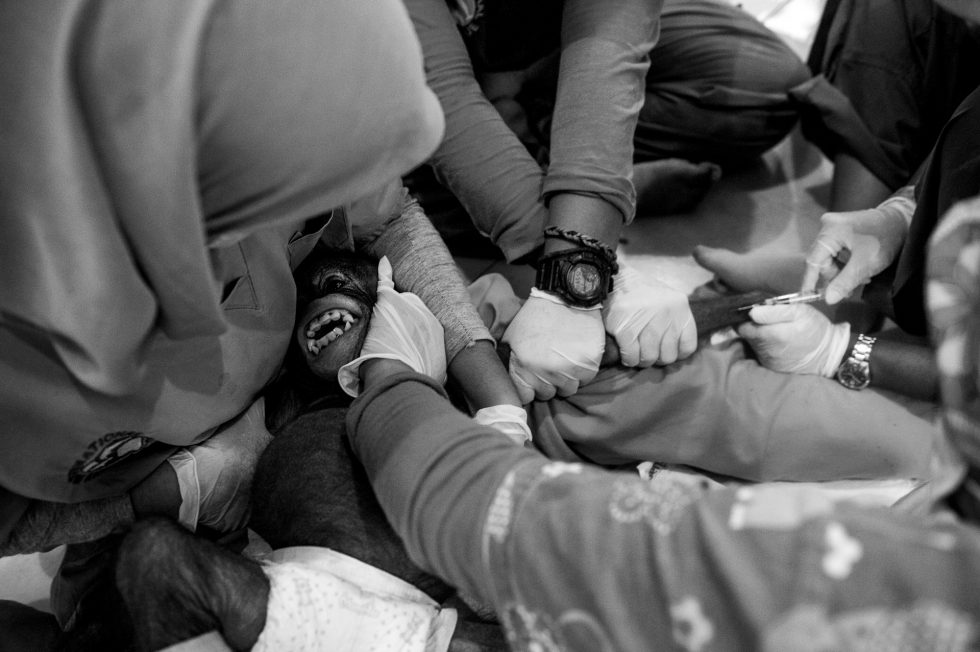 It takes several nurses to calm down a young orphaned orangutan from his fear of a syringe for a simple procedure such as blood testing. 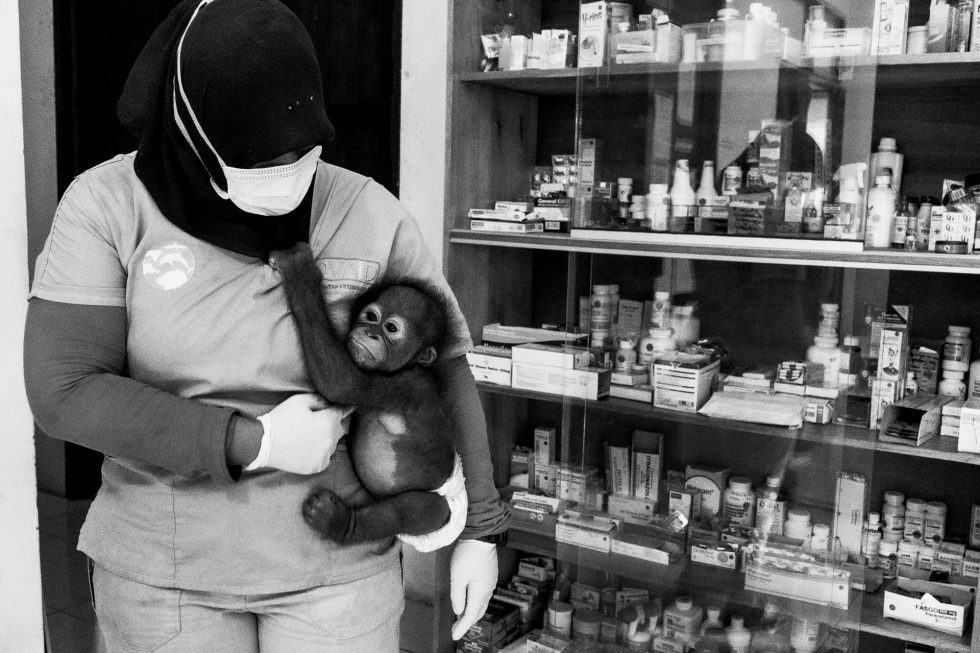 An infant orangutan is not feeling well. Just like human babies, this orangutan clings to his beloved vet who has been taking care of him from the beginning of his arrival at the rehabilitation centre. 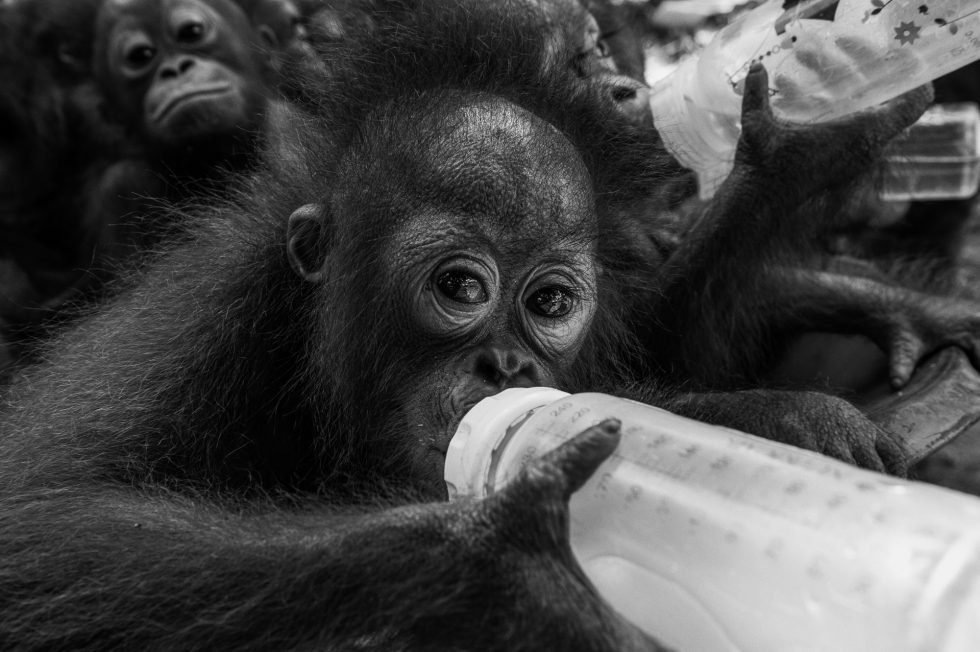 Besides being given milk on a daily basis, this infant orangutan is also given a bottle of fruit juice to enjoy. As a fruit eating animal, baby orangutans are bound to love their fruit juice. 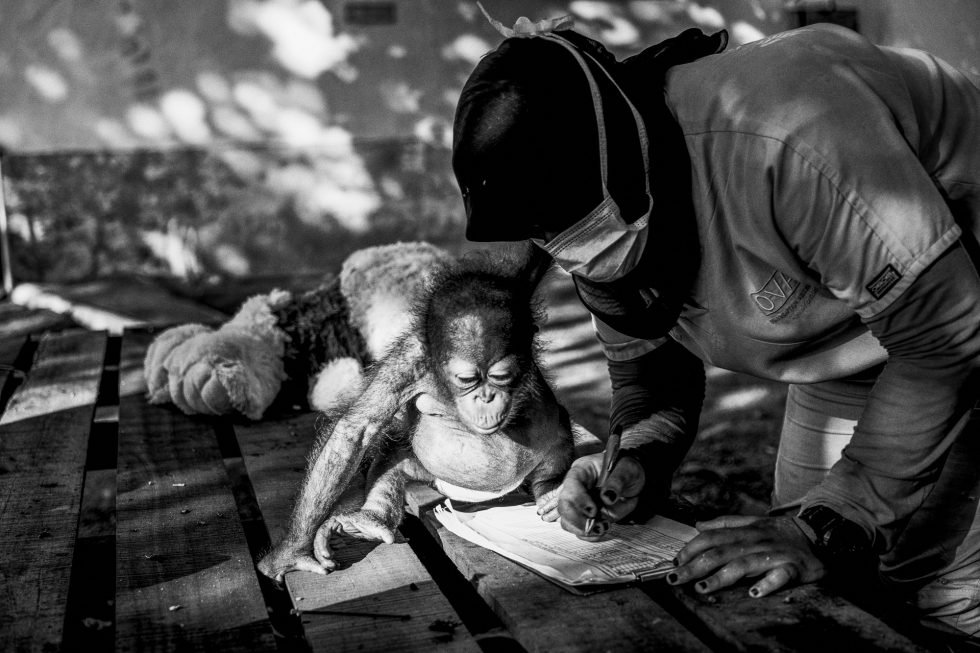 Being slightly under the weather, this little one clings to the vet and now pretends to understand what is written on the report. 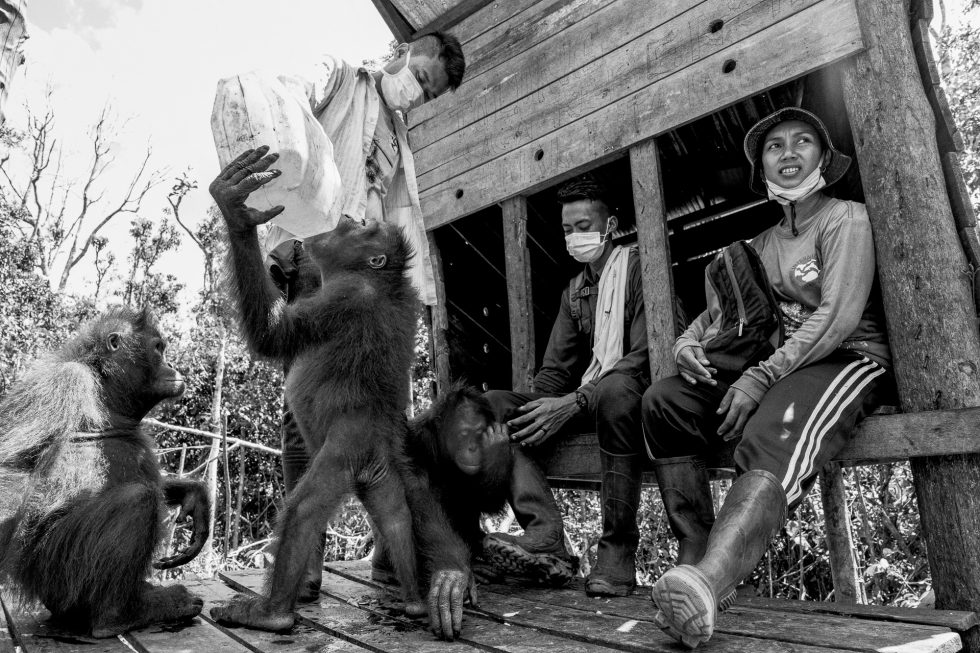 It’s hot, it’s bright and it’s humid. This juvenile orangutan appreciates his water jerry can whilst his friend is waiting for his turn patiently. 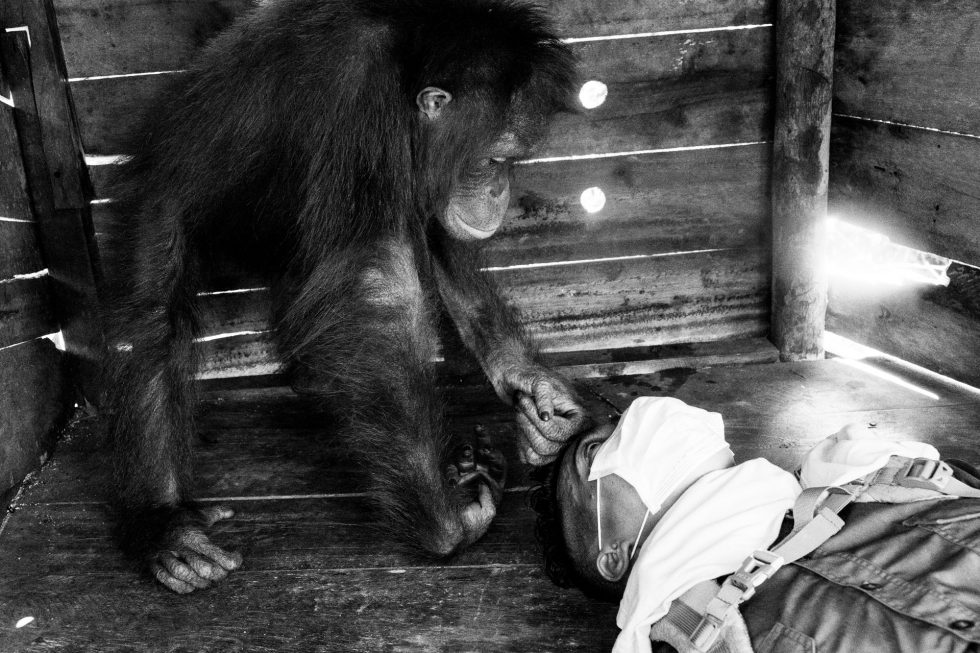 An adult orangutan is gently touching the male keeper inside a wooden hut. 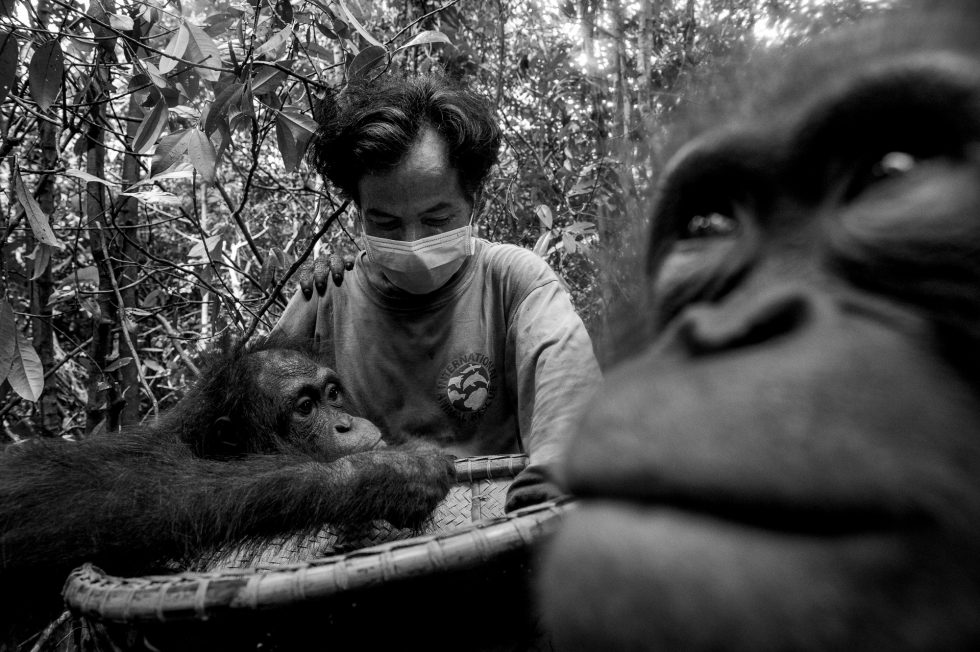 A male keeper comes to visit the territory where adult orangutans live freely and safely in the forest reserve. One particular orangutan loves to demonstrate his affection for the keeper, although in fact this is not good for his future. 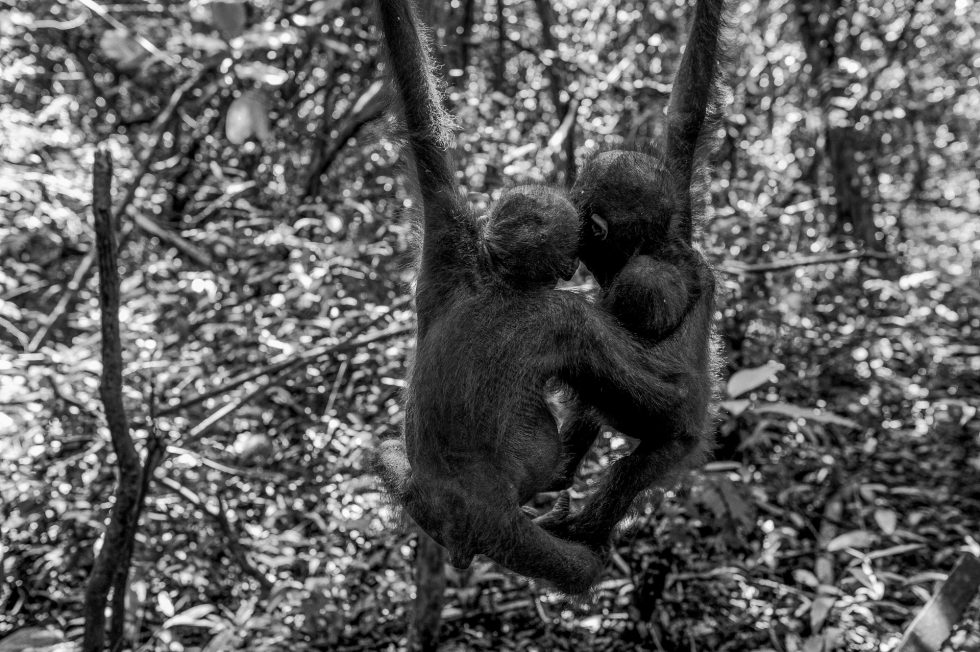 Some young orangutans identify their own best friend at a very early age. Here these two best friends seem to be so inseparable. They play together constantly, they ride in the wheelbarrow together and they share the same sleeping quarters and hugging each other is their favourite pastime too.